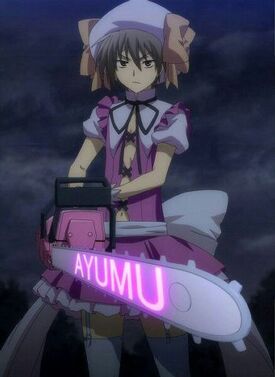 Ayumu Aikawa is the protagonist of KoreZombie, a highschool student who lives alone while his parents and younger brother live abroad. He's lazy, snarky and a pervert who generally takes it easy and prefers to be alone despite his decent social skills. He falls victim to a local serial killer and dies, but is resurrected by Eucliwood Hellscythe as a zombie. Ever since, he lets her stay with him in his large house. He later becomes involved with the affairs of masou shoujos, the underworld, and vampire ninjas, and meets Haruna and Seraphim who also start living with him. Originally pleased with staying alone, basking in calmness, he ends up appreciating the value of camaraderie and excitement in life.

Attack Potency: Street level to Wall level (Can easily jump from roof to roof of houses), Wall level with grenades, at least Wall level+ at 600% (Damaged a 5-meter dragon Megalo that could casually destroy a large room) | At least Wall level+, likely Small Building level (defeated Zarii), up to City Block level at 1000%

Speed: Superhuman travel speed (Ran 500m in 15 seconds), Faster with bursts. Subsonic combat speed (Can keep up with Seraphim's attacks, which are faster than the eye can see; can barely track Ariel) | Subsonic travel speed (Far faster than before, can catch up to Seraphim), Subsonic+ with bursts (Slightly slower than a missile from a rocket launcher), up to Supersonic+ at 1000%. At least Subsonic combat speed, likely higher (Faster than before)

Durability: At least Wall level (Casually tanked being hit by a bus at city travel speed), higher with stat amp | At least Small Building level (Remained intact from an attack compared to a rocket launcher's), higher with statistics amplification, up to City Block level at 1000%

Stamina: Extremely high. Being a zombie, regular humans limits have been removed, allowing him to keep acting and fighting for long periods of time. Can continue moving and thinking clearly regardless of his body's state (like being impaled by dozens of spears, or cut in pieces; retained consciousness after being blown to dust), though being severely beaten up will slow him down. Lower stamina during the day; very low when facing harsh light and heat. Near-limitless at night, even higher around graveyards

Intelligence: Fairly capable and imaginative both for getting through life and during combat. Is able to stand up to stronger opponents by using his advantages as a zombie, namely increased stamina, immortality, tolerance to pain, and surpassing body limits, like against Seraphim, Vinaigrette and Kyoko. Managed to hit Ariel and dodge attacks from Chris through continuous analysis of their abilities

Standard Tactics: Ayumu will generally start with CQC while stat amping himself higher and higher throughout the fight, also depending on how his opponent reacts and what he does. Using his zombie characteristics, he often allows himself to take damage in order to figure out his opponent's attack pattern and moveset with his wit and analysis. Even as a Masou Shoujo, he will rarely use energy attacks, instead relying on the even greater physical power he gets from his boosted stat amp, either with body attacks or with his chainsaw. He usually only uses memory manipulation post-combat, as it requires some time to cast. When he figures out a way to beat his opponent, or severely weaken him at the very least, he baits him with a faint/fake sign of weakness and/or waits for the best moment to use the move.