VS Battles Wiki
Register
Don't have an account?
Sign In
in: Characters, Blades of Time, Time Users,
and 23 more 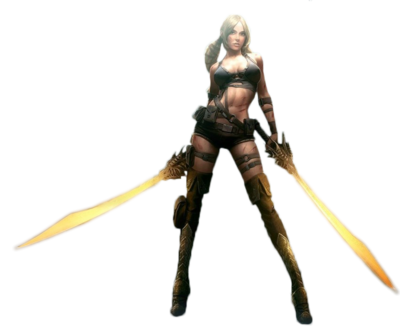 Ayumi is the protagonist and playable character of Blades of Time. She is a treasure hunter who uses a magic orb to travel to another world known as Dragonland in search of fabled treasure.

Superhuman Physical Characteristics, Master Swordswoman and Rifle User, Acrobatics, Limited Flight (Can dash to and between airborne opponents), Time Manipulation (Can rewind time), Duplication (When she rewinds time, her present self remains in the same location while her past selves are rewound and then repeat the same actions she had done previously – time duplicates are Invulnerable during this time. When reaching low health without the ability to heal, she automatically summons a shadow clone to help her fight), Healing, Fire Manipulation, Ice Manipulation, Earth Manipulation, Power Nullification (Order Sphere can nullify Invisibility, Time Manipulation, and Spatial Non-Corporeality within its area of effect and knock away Chaos Energy)

All prior on a higher level, Non-Physical Interaction (Spatial. Can attack the Chaos Reaper, which could previously not be killed even within Order Spheres due to existing on a deeper level within the Chaos Subspace), True Flight, possibly Resistance to Mind Manipulation (Possibly broke free of the Keeper of Chaos's control, though he may also have intentionally freed her from his control to allow her to make her own decision)

Stamina: Extremely high. Explored Dragonland for a long period of time with no rest, food or drink, battling many enemies during this time.

Range: Extended melee range with swords, tens of metres with magic and guns.

Weaknesses: None notable | Due to being drenched in Chaos magic, she is vulnerable to the Keeper of Chaos's control.

Freeze: Sends a wave of ice at the enemy. Further attack to frozen enemies do extra damage.

Ignition: Sends a wave of fire at the enemy, igniting them to do further damage over time.

Order Sphere: Creates a large sphere of Order energy with Ayumi at the center. Within this space, enemies that normally exist in another space, making them invisible and non-corporeal, can be freely attacked. Time Rewind does not work within this sphere, however.