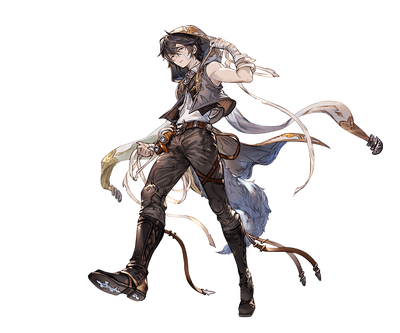 Born into a happy home, Ayer is driven by his true nature to seek a new world. Although he feels alive in the arena, will he ultimately find true happiness there? Only the skies hold the answer. A young man bearing a complex psychological situation, he continues honing his body as he travels through the skies. Bereft of a goal or destination, his attempt to reclaim his dignity manifests itself through endless, aimless training.

Attack Potency: Multi-Continent level (Damaged Jessica who stalemated Nephthys, also fought against Siegfried who defeated Fafnir) | At least Multi-Continent level, possibly Planet level (Defeated Restricted Seox who was able to keep up with Al-Khalid, wearing him out to the point that he no longer has enough energy to deal with Seofon. While Seox is restricted, Eternals are still a threat to the entire skydoms)

Stamina: High. Able to keep fighting Jessica after he fought Siegfried and Seox.

Intelligence: Above Average. Extremely skilled fighter that can match even Seox, one of the Eternals, who are one of the most dangerous people in the sky.

Weaknesses: Weak to Wind based attacks. He hates his Bowman personality, wasting his true potential in the process. Guilty Break damages his own body, though this is part of the strategy, as his method of fighting is to lowers his own health as much as can to use the full potential of Guilty Break, making him one of the strongest heavy hitters in the game.