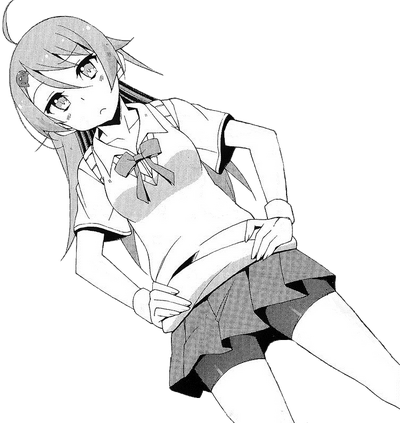 Ayane Shinomiya is a Ghost User with a very low Ghost score that constantly competes with her sister for their father's affections. Ayane feels that she is surpassed in everything by her sister Kurumi, but after the strongest Ghost user in the world kidnaps Kurumi and forces Ayane to kill her father, she sets on a path to defeat him and save her sister.

Tier: 10-A physically, 9-B with Emperor Snake: Basilisk, at least 9-B with Air Ghost, likely 8-A with Chaos God Nyarlathotep

Age: In her teens.

Powers and Abilities: Expert at predicting the enemy's moves and analyzing their powers and surroundings, can manipulate shoelaces, Can switch out her power with another Ghost user's | Metal Manipulation | Can create small portals by cracking space | Superhuman Physical Characteristics | Air Manipulation | Ability to manipulate attractive and repulsive forces

Attack Potency: Athlete level physically, Wall level with Emperor Snake: Basilisk (Capable of stopping a car dead on its tracks and flip it vertically with a punch, can casually rip a car's door and crush a handgun or bend a metal pipe), at least Wall level with Air Ghost (Used to slice a large hole in a reinforced metal door, should be considerably superior to Emperor Snake: Basilisk), likely Multi-City Block level with Chaos God Nyarlathotep (Same power as Daymare)

Speed: At least Athletic Human (Comparable to her sister Kurumi who is an expert gymnast, could keep up with Olga, a trained fighter and assassin)

Durability: Street level regularly (Can continue fighting after receiving several small cuts, internal damage from Olga's punches and survived being dropped from dozens of meters into the ground by Daymare with enough strength to crack the ground), Wall level with Emperor Snake: Basilisk (Nothing short of a bullet can scratch the user, user is unharmed by being attacked with a metal pipe, regular people hurt their hands by punching the user) and Air Manipulation Ghost (Can create barriers powerful enough to stop several pieces of wreckage being thrown at her by Daymare)

Stamina: Above average, can continue fighting after several injuries

Intelligence: High, national-level chess player, an expert at analyzing the enemy's power, their behavior and surroundings to predict the hundreds of possible enemy actions and come up with appropriate countermeasures and a plan to win, even when using a weaker Ghost

Weaknesses: Normal human weaknesses | Needs to touch the metal to manipulate it | Cannot close a portal while something is crossing it | None notable | Not immune to her own power.