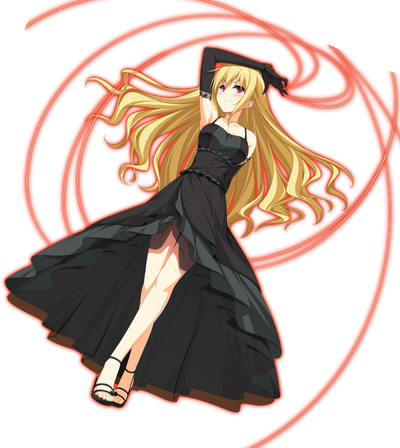 Ayane Amamiya is a friend of Momiji Satomura and Nagisa Suzushiro. She is also a perfect student council president; in fact, she is perfect in every way possible. She is a genius pianist, likes to read on her free time and has the charisma that turns heads. Unfortunately, this also means she is distant from most people as they are afraid of her reverence. Reiji, however, is different. He treats her normally just like every other girl, which is the cause for Ayane's romantic feelings toward him.

It is later revealed that the masked Walküre (ワルキューレ warukyūre; German for Valkyrie) in Eye Space was Ayane fighting to protect the one she loved from harm.

Tier: At least 5-B, likely higher with Dainsleif | Low 2-C

Powers and Abilities: Superhuman Physical Characteristics, Immortality (Types 3 and 8; Magi can only die by having their magical weapon destroyed), Regeneration (Low-High; however, this is not combat applicaple since it takes them a whole day to recovers from fatal injuries), Kinetic energy manipulation (Can drain Kinetic energy and reduce the object's kinetic energy to zero in instant), Magic (Magic artifacts type), Power Nullification (can nullify any physical and energy-type attack by reducing the attack's kinetic energy to zero), Paralysis Inducement (can trap people in Stringload's net and stopping them from moving by draining all of their kinetic energy), Thread Manipulation (can turn the strings into very sharp blades of super-concentrated kinetic energy that can cut through nearly everything), limited-Extrasensory Perception (Can detects the magical signatures of Magi in an island-wide range. However, this ability is limited to only magi alone)

Attack Potency: At least Planet level, likely higher with Dainsleif (The amount of kinetic energy that Ayane used to attack Ryuichi was so enormous that he after absorbed it, Ryuichi has gained enough energy to use Thor's Hammer Full Access. Should be noted that at that time, Ryuichi was already exhausted of magical energy) | Universe level+ (Became the Ragnarok's victor of her own world and gained enough power to perform Fortissimo the ultimate magic with Loki to merge her timeline with Loki's timeline); see the note below

Speed: at least FTL reaction and attack speed (Easily reacted and moved her strings to block Ryuichi's Thorhammer Full Access, which can move 9 times faster than the speed of light) | Unknown, likely the same

Lifting Strength: Superhuman (Magi are stated to be superior to human in physical abilities) | Unknown, likely the same as before

Striking Strength: Superhuman | Unknown, likely the same as before

Stamina: Very high (can fight for a long period of time without losing much strenght) | Unknown, likely the same

Range: At least a dozen of meters

Intelligence: Gifted (An expert analyzer. Can quickly analyze the combat styles of the opponent and come up with a way to handle them. A very excellent student at her school and very knowledgeable about mythologies)

Weaknesses: Stringload cannot prevent the secondary powers of such attacks from destroying the string (Ex. Jin's fire sword). If Ayane's magical weapon is destroyed, she will be erased from existence.

Skinfaxi: By enhancing her sixth sense with magical energy, Ayane can detect the magical energy signal coming from the other magi. This ability works like a radar and its range is massive enough to cover the entire island of Tsukuyomi-jima. However, this ability can only locate magi, the higher rank like Yggdrasil or lower rank like Creator would not be detected by this ability.

Brisingamen: String Load’s ability to manipulates the kinetic energy. By touching a moving object with String Load’s string, Ayane can reduce all of its kinetic energy to zero and completely immobilizes it. The target could be varies from simple objects like human fleshes (Ayane can traps people in String Load’s net without Kinetic energy to moves, like a spider traps its prey in the web) to the powerful mythic class attacks (The attacks that touches Ayane’s strings would get their kinetic energy reduced to zero, get negated completely), make this ability an absolute defense for Ayane. Brisingamen at its peak can negate even Odin’s Gungnir, however, it cost most of Ayane’s magical energy to perform this feat.

Note: Despite Dainsleif is stated to be able to generate an infinite amount of kinetic energy multiple times before, Ryuichi's Jarngreip was able to absorb it. Later, it was shown that Jarngreip's primary weakness is that Jarngreip cannot absorb too much energy otherwise it would overload and destroy itself, leading to Ayane's death.

Note 2: About the "Post-Ragnarok" key. Although it wasn't shown in-game, but other than the 2 worlds where Momiji and Sayuki have become the victor of Ragnarok, Loki had traveled across through many other worlds where other Ragnarok participants have become the victor of their own world and merges their world into his world. Like how he said to Jin Arizuka, he intends to save all of them. And since Fortissimo requires Loki and another Ragnarok victor to cast it it's safe to assume all of them has gained enough power to merge their timeline with Loki's timeline.