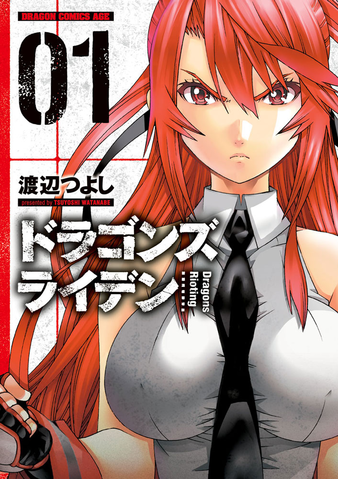 Ayane is a first-year student currently attending Nangokuren High School, and is considered one of the three competing Dragons. She is the leader of the recently formed Ryōzenpaku faction, and after witnessing Rintaro's strength she has decided to become his disciple.

Lifting Strength: Class 1 (Not as physically strong as Kyoka or Rintaro but she also just like Rintaro upheave large amounts of earth.)

Standard Equipment: Boxing Gloves: Whenever Ayane goes into a fight she always puts on a pair boxing gloves to enhance the power of her punches

Sensenryū Sōgageki: By increasing her speed and moving in a tip-toe manner she can produce after images which looks like they are more of her and is able to attack from all sides.

Gōhō Hagan: Ayane's version of Gōhō Hagan. She manages to figure out Rinataro's technique of moving large amounts of earth with a single strike. Contrast to Rintaro's method however, she instead causes two layers of brickwork to slam together, thereby enclosing the target in a prison of stone. But using this places a tremendous burden on her body and currently, she can use it only once per battle. The result is also far weaker than Rintaro's as he's able to create a huge corridor of stone, while she can only move a relatively small area of earth.

Retrieved from "https://vsbattles.fandom.com/wiki/Ayane_(Dragons_Rioting)?oldid=4576649"
Community content is available under CC-BY-SA unless otherwise noted.