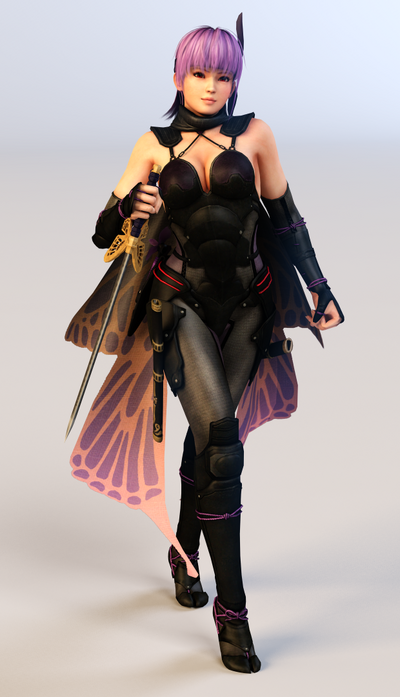 A playable character in the Dead or Alive series, Ayane also made her way into Ninja Gaiden in the Xbox revival of the series. A member of the Mugen Tenshin Ninja Clan and the younger half-sister to Kasumi and Hayate, Ayane was conceived when Raidou raped Ayame. This has left a black mark on Ayane's childhood. She is the current leader of the Haji Mon Sect of the clan of the Mugen-Tenshin clan. Genra, sympathized with her, and decided to take her in as her foster father and teacher. Years later, she learned the truth, and dedicated herself to becoming the strongest practitioner of the Hajinmon style. She failed to protect Hayate from Raidou, and after Kasumi left, was ordered to kill her. In the 2nd tournament, she searches for Hayate as well, and encounters Helena, who believes Ayane to be her mother's killer at first, but it turns out to be a misunderstanding. Upon hearing that her foster father Genra has been abducted and used as a subject for Project Omega, she enters the 3rd tournament to end his suffering. She then joins her half-brother Hayate to take down DOATEC once and for all. Her clan is apparently an ally of the Dragon Ninja Clan. Ayane is the primary choice for the Mugen Tenshin when they need assistance from the Dragon Clan as she has built a mutual friendship with Joe and Ryu Hayabusa. Even though he's leagues above her in rank, Ayane aids him on his missions, either by informing and helping from the sidelines or outright fighting alongside him.

Speed: Hypersonic with Massively Hypersonic reaction/combat speed (Can keep up with Ryu Hayabusa, also fought the same enemies, and is considered to be the fastest character in Ninja Gaiden games)

Stamina: Large, is a skilled ninja that is respected by Ryu, so naturally she should have stamina reserves in the same league as him

Range: Several dozen meters with projectiles, much higher with Ninpo, possibly in the hundreds of meters range

Intelligence: Skilled combatant, is knowledgeable of Ninpo magic and is talented as a ninja

Weaknesses: Her most powerful attack requires a lengthy prep time

Retrieved from "https://vsbattles.fandom.com/wiki/Ayane?oldid=5463208"
Community content is available under CC-BY-SA unless otherwise noted.