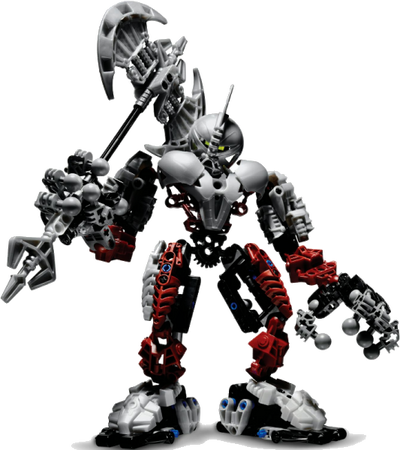 Axonn is one of the members of the Order of Mata Nui, a secretive organization devoted to serving the will of Mata Nui. Originally a member of its predecessor organization, the Hand of Artakha, after it was disbanded he went to conquest instead, until he was recruited by Hydraxon into the Order. Alongside his friend, Brutaka, he was stationed to defend Ignika, the Legendary Mask of Life.

Age: Unknown, at least tens of thousands of years old

Classification: Member of the Order of Mata Nui

Powers and Abilities: Superhuman Physical Characteristics, Energy Manipulation, Electricity Manipulation, Time Stop (Can freeze others in space and time using stasis fields), Healing, Rage Power, can see through lies, illusions, and invisibility with Rode, Resistance to Mind Manipulation/Telepathy (All members of the Order of Mata Nui have their minds shielded from telepathic assault; not even Teridax can break through Axonn's mental shields) and Illusions, Longevity

Attack Potency: Island level (Comparable to Brutaka, who he's fought and defeated in the past, and he can cleave a mountain in half with his axe).

Durability: Island level (Shrugged off many attacks from Brutaka, including one that could've brought down a Kanohi Dragon).

Stamina: Extremely high. Axonn's stamina should be comparable to that of Toa, and the Toa Manga fought against the Kanohi Dragon for an entire month.

Intelligence: Axonn is a highly skilled and experienced warrior.