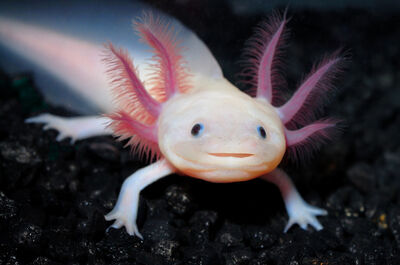 Axolotls are a species of underwater salamander that are at the brink of extinction in the wild, yet are often seen in labs and as exotic pets. Axolotls are used as model animals in scientific research for their amazing ability to regenerate lost limbs and even bits of vital organs.

Gender: Varies; can be male or female

Powers and Abilities: Small Size (Type 1; most commonly found to be somewhere around 23 cm long), Underwater Breathing (Type 1), Regeneration (Low-Mid, possibly Mid; can regenerate lost limbs within months and even parts of vital organs such as the heart, brain, and spinal cord within 30 to 60 days), Enhanced Senses (Axolotls use their sense of smell to detect prey), possibly Biological Manipulation (Axolotls exhibit neoteny, or the act of reaching sexual maturity before metamorphosizing)

Attack Potency: Below Average level (In the wild, they were predators of worms, insects, and small fish)

Speed: Below Average Human (Axolotls can go around 10 mph, but it is rare for them to do so)

Lifting Strength: Below Average Human (Like other underwater creatures, they likely had to support their own weight underwater, which is about 2.11 to 8 ounces)

Weaknesses: As they grow gills instead of lungs, axolotls cannot survive outside of water. Their regeneration is rather slow, meaning it'd still be easy to kill an axolotl. As pets, water temperatures outside an acceptable range (16-18 °C) will cause stress, which leads to disease and death.

Retrieved from "https://vsbattles.fandom.com/wiki/Axolotl?oldid=6734582"
Community content is available under CC-BY-SA unless otherwise noted.