VS Battles Wiki
Register
Don't have an account?
Sign In
Advertisement
in: Tier 10, Tier 10-A, Unknown Tier,
and 29 more 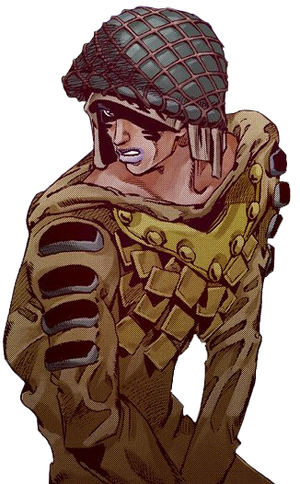 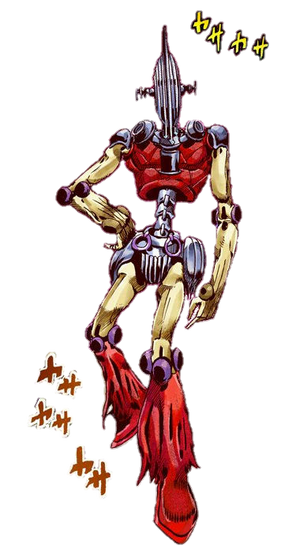 Axl Ro is a minor antagonist in JoJo's Bizarre Adventure Part VII: Steel Ball Run. He's an agent to the President who attacks Hot Pants, Gyro and Johnny with his Stand, Civil War, summoning corporeal representations of figures from their pasts in order to steal the Saint's Corpse parts.

Tier: 10-A. Unknown with Civil War, Varies with Summonings

Extrasensory Perception (Capable of seeing ghosts and souls among some other supernatural forces that are normally otherwise invisible), Aura, Summoning (Of his Stand), Weapon Mastery. Resistance to Transmutation, Disease Manipulation, and Mind Manipulation with Corpse Parts (The Holy Corpse allows the holders to resist Scary Monsters and similar abilities)

Superhuman Physical Characteristics, Incorporeality (Stands are the incorporeal manifestations of one's vital energy, and can only be harmed by other Stands), Non-Physical Interaction (Stands can interact with ghosts and other Stands), Selective Intangibility, Invisibility (Stands can only be seen by other Stands and Stand Users), Extrasensory Perception (Much like its user), Pocket Reality Manipulation, Aura, Can summon others' sins/things they sacrificed or leave in the past to attack them (This has been described both as Civil War creating a dimension where this happens and conventional summoning), Memory Manipulation (His Stand has access to his target's memories), Upon contact the sins will fuse with the target, wrap and incapacitate them, and warp their bodies, Possibly Empathic Manipulation with the sins, Resurrection (If Axl is sacrificed/killed by his opponent he will resurrect himself with an entirely new body, transferring the opponent all his sins/things he sacrificed), Can speak through his summons, Regeneration (High-Mid for Civil War. Unknown for the sins. Low-Godly for Axl Ro after being sacrificed; Civil War can break itself into different parts and come back from that. The sins can fix their altered body after being shot by Johnny. Axl Ro created a new body for himself, and after regenerating from lethal damage he stated that his existence was protected by his opponent's sins, and that his opponent will never be able to kill him despite being completely capable of causing him physical damage), Immortality (Types 3 & 8 after being sacrificed. Reliant on his opponent's sins).

Speed: Peak Human. Massively FTL with Civil War (Reacted to Gyro's Steel Ball and evaded it by breaking itself into different parts. The "sins" were able to dodge Johnny's nail bullets at short distances)

Weaknesses: Water undoes Civil War's effects. After being sacrificed he can have every sin attacking him if he personally kills/sacrifices the owner of those sins.