VS Battles Wiki
Register
Don't have an account?
Sign In
in: Guilty Gear, Time Travelers, Magic Users,
and 31 more 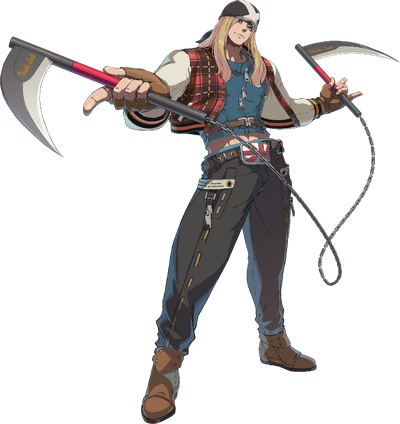 Axl Low (アクセル=ロウ, Akuseru Rō) is a character in the Guilty Gear series. He is a time traveler of British descent. He comes from the 20th century, over one hundred and fifty years before most of the Guilty Gear storyline. His main goal is to return to his own time period, mainly because of his desire to return to his girlfriend, Megumi. For this reason, he seeks out various means and is continually attempting to solve his time slipping mystery.

Powers and Abilities: Superhuman Physical Characteristics, Weapon Mastery, Immortality (Type 1), Self-Sustenance (Type 1 and 2), Fire Manipulation (Can create fire with his weapon), Chain Manipulation (Can create countless chains with his instant kill), Explosion Manipulation (With his instant kill), Time Manipulation and Travel (Main abilities of Time Slipper is to travel through time and manipulate it, including erasing timelines and stopping time) Non-Physical Interaction (Able to hit spirits), Can enter different planes of reality, Reality Warping, Causality Manipulation and Existence Erasure (Existence like him can disturb the flow of reality, affect cause and effect and erase timelines), Telepathy (Telepathically talked with Sol), Physics Manipulation (Stated that time slippers are able to interfere with physical phenomenons), Magic as Information Manipulation, Acausality (Type 2 and 4; He is unwanted and miracle of the backyard, not having past or future), BFR (Can send someone to Backyard or different points in time), Portal Creation (Can create portals that connects through timestream), Teleportation (Able to teleport through space and time), Spatial Manipulation (It is suggested that the people who can teleport to Backyard can swap space), Enhanced Senses (Can sense people from different points in time and dimensions), Matter Manipulation and Creation (Can manipulate matter to an extent, and created clocks and tables), He is born by collective will to live by humanity, Resistance to Extreme Cold, Cosmic Radiations, Information Manipulation and Transmutation (Able to withstand Backyard which turns one's information to something else entirely), Material, Spiritual and Mental attacks (Able to talk with Bedman in the dream world which is part of backyard, which assault's one's body, mind and soul)

Speed: At least Massively FTL+, possibly Immeasurable (Can keep up with the likes of Jack-O Valentine and Sol)

Durability: Low Complex Multiverse level (Consistent shown to be as durable as I-No)

Range: Standard melee range, extended melee range due to weapon of choice, thousands of kilometers with attacks and universal with Hax.

Intelligence: Very skilled in the use of magic and his signature weapon, also knows how to travel in time and enter in different planes of reality.

Weaknesses: Somewhat vulnerable up-close, has yet to fully master his time magic. 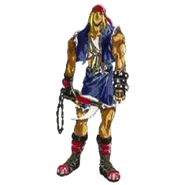 Axl in the first Guilty Gear. 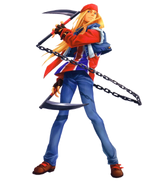 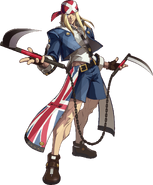