VS Battles Wiki
Register
Don't have an account?
Sign In
Advertisement
in: Tier 5, Tier High 5-A, Tier 4,
and 67 more 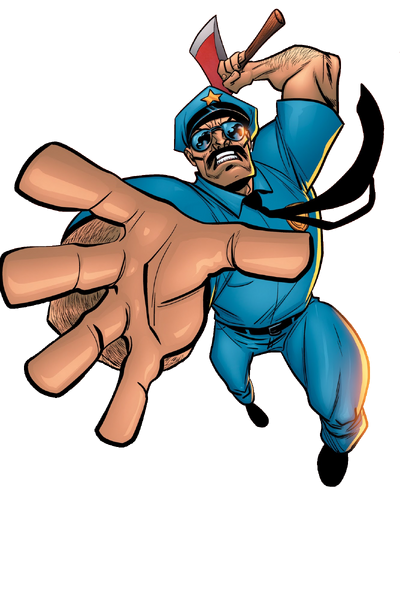 Axey Smartist is the brother of Flutey Smartist, born to Bobber and Gobber Smartist. After making himself the enemy of Telescoping Gun Cop in the future, Telescoping Gun Cop went back in time to poison Axey's parents. He swore he'd find his parent's killer. Axey eventually became a policeman. It was when he found the "perfect fire ax" at the scene of a fire that he became Axe Cop. He hired a partner (this was his brother, Flute Cop, but he didn't know it was him because of amnesia), and got to work cleaning the streets of crime.

Superhuman Physical Characteristics, Preparation, Self-Sustenance (Types 1 and 3), Social Influencing (Said to be the perfect male specimen and had every unmarried woman lined up outside his home), Flight, Martial Arts, Weapon Mastery, Vehicular Mastery, Telekinesis (Can perform a psychic neck snap), Fusionism (Has fused with his teammates on multiple occasions), Immersion (Reached into his TV and pulled out The Best Fairy), Empowerment (Fire only makes him stronger, as does magma.), Poison Manipulation (Has poisonous spit), Animal Manipulation (Can talk to owls), Sound Manipulation, Death Manipulation (Bad guys die if they listen to his singing), Age Manipulation (Can age opponents to death by yelling the word "old."), Mind Manipulation (Can hypnotize villains and the undead), Morality Manipulation (Turned evil robots good by biting them), Soul Manipulation (Should he take off his sunglasses, whoever sees his eyes will have have their soul removed. He notes, however, that this is a last resort for him. Kicked an opponent's soul out of their body in the cartoon), Astral Projection (Should he be restrained, a ghost of himself will appear, kill his captors, then free him), Power Mimicry, Shapeshifting (By spilling someone's blood on himself, he can both gain their abilities and adopt some of their physical features), Instinctive Reaction (Was still able to fight just as well as usual despite having his memory erased), Reality Warping (Anything he dreams will become reality), Creation (Whatever he eats, a poisoned copy of it will appear in his hand), Regeneration (Low-High, regenerated from melting), Immortality (Types 1, 2, 3, and 6, if his head is cut off it will grow spider legs and attach itself to someone else's body or simply reattach to his own). Resistance to the following: Fire Manipulation, Cosmic Radiation, Magma Manipulation, Extreme Heat, Morality Manipulation, Corruption (Type 1), Transmutation, Mind Manipulation

Sleep Manipulation (Via faint bombs and the Axe Cop Swinger 2008), Explosion Manipulation (The Axe Cop Swinger 2008 spawns a bomb in the victim's mouth once they wake up), Poison Manipulation, Age Manipulation (Has access to flowers which are poisonous and turn anyone who sniffs them into children), Portal Creation, BFR, Time Travel (Via Laser-Portal Gun), Power Nullification (Via the Blue Diamond Sword), Extrasensory Perception (Can see invisible things with special glasses), Summoning (Can summon dinosaurs with the dinosaur horn and can summon any of his numerous allies with a whistle), Immersion (Entered a mouse's imagination and took something from it with him into the real world), Light Manipulation (Has a bucket of light which can illuminate the entire world), Transformation, Weather Manipulation, Air Manipulation (Has an axe which can transform into any gun, including a tornado gun. Can create a hurricane), Body Puppetry (Has a gun which makes the targets flop around like dying fish), Reality Warping (Anything drawn with the Magic Pencil will become real), Duplication (Has what would likely be equal to 3 trillion clones of himself in his closet which he can summon), Holy Manipulation (God gave Axe Cop and his teammates Golden Holy Axes)

Attack Potency: At least Dwarf Star level (Capable of harming those who can harm him), likely Solar System level (Claimed he could throw the sun at an asteroid and that such a feat would be easy). Several of his powers and weapons can ignore conventional durability.

Speed: Massively FTL with FTL reactions (Reacted to an attack from Rainbow Girl)

Lifting Strength: At least Class Y (Capable of wielding the Biggest Axe Ever), likely Stellar (Claimed he could throw the sun)

Durability: At least Dwarf Star level (Can withstand the counter-force of the Biggest Axe Ever), likely Solar System level

Stamina: Virtually limitless (Needs only two minutes of sleep a night and can do infinite reps of anything)

Range: Extended melee range to hundreds of meters with the Perfect Fireman's Axe, up to Planetary with other axes and equipment (The Perfect Axe's blade can split into 1000 additional blades. Axe Cop can wield The Biggest Axe Ever which is at least planetary in size)

Standard Equipment: The Perfect Fireman's Axe, his sunglasses, his hat, and his mustache

Intelligence: Extremely high (Though often single-minded and slightly arrogant, Axe Cop is an incredibly skilled combatant, having defeated Earth's leading masters of kung fu, Taekwondo, and jiu jitsu in unarmed, one-on-one fights each in a matter of minutes. After becoming the President of the World, he led Earth into one million years of peace. He has orchestrated the defeat of cosmic-level threats on multiple occasions, demonstrated the ability to immediately deduce whether someone is friendly or malicious, and displayed fluency in both English and Chinese)

Weaknesses: Will melt if someone manages to surprise him, though this is rather difficult to accomplish, and he will regenerate after some time. Cherry-flavored candy canes leave him on the verge of death