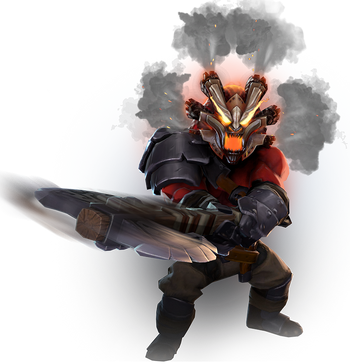 As a grunt in the Army of Red Mist, Mogul Khan set his sights on the rank of Red Mist General. In battle after battle he proved his worth through gory deed. His rise through the ranks was helped by the fact that he never hesitated to decapitate a superior. Through the seven year Campaign of the Thousand Tarns, he distinguished himself in glorious carnage, his star of fame shining ever brighter, while the number of comrades in arms steadily dwindled. On the night of ultimate victory, Axe declared himself the new Red Mist General, and took on the ultimate title of 'Axe.' But his troops now numbered zero. Of course, many had died in battle, but a significant number had also fallen to Axe's blade. Needless to say, most soldiers now shun his leadership. But this matters not a whit to Axe, who knows that a one-man army is by far the best.

One by one the soldiers of the Red Mist fell, some in battle, others to Moghul Khan's ambitions, until the self-declared general found himself a commander without troops. No matter, Axe thought. For a one-man army is the best army of all. Leaping into battle, Moghul Khan compels nearby foes to attack him with a taunting Berserker's Call. Absorbing blows from every direction, Axe reacts by swinging his axe full circle in a Counter Helix, easily dispatching the swarm he had gathered. But alas, not all stay long enough to meet their end. The few limping away from Moghul Khan feel an inexplicable Battle Hunger, a hunger that is never sated before Axe sends them to an early grave with Culling Blade.

Powers and Abilities: Superhuman Physical Characteristics (Has immense strength allowing him to make large craters with his fist, shatter stone pillars and punch torsos off), Martial Arts (Skilled in boxing), Weapon Mastery (Wields axes, scythes, flails, swords), Magic (Knows a few magic spells), Mind Manipulation (His war cry forces opponents to fight him), Damage Reduction (Takes less damage during Berserker's Call. Guard of the Red Mist also provides magical protection against damage), Empathic Manipulation (Can cause rage in an opponent with a curse), Curse Manipulation (Able to inflict curses that enrages opponents and injures them unless they murder someone), Statistics Reduction (Can cast debuffs that lower movement speed), Statistics Amplification (Able to boost his movement speed), Instinctive Reaction (Can automatically react to attacks with a helix counter attack) Power Nullification (Those affected by Berserker's Call cannot use spells), Damage Transferal with Molten Claw (Can reflect damage taken), Teleportation via Blink Dagger (With this knife he can teleport up to several meters), Resistance to Empathic Manipulation (Resists the effects of Ragestone, whose magical influence instills acts of madness and violence), Status Effect Inducement with Berserker's Witchslayer (The weapon has runes that will prevent it from being enchanted by those that may seek to disarm the wielder)

Standard Equipment: Reaver and many other axes and blades he has collected, Blink Dagger, Vanguard, Molten Claw, Mantle of the Cinder Baron, Rampant Outrage

Intelligence: Above Average (Highly skilled in combat, capable of taking down an entire horde of Zongom warriors with his bare hands and then killing a group of elite Zongom warriors with ease. All Oglodi warriors are trained to identify and take advantage of weak spots on their enemies. Besides combat, Axe is also a skilled blacksmith, having forged his own weapons during his time in the Red Mist Army. However, Axe is average in conventional intelligence.)

Weaknesses: Can be very arrogant.