VS Battles Wiki
Register
Don't have an account?
Sign In
in: Characters, Female Characters, Good Characters,
and 31 more 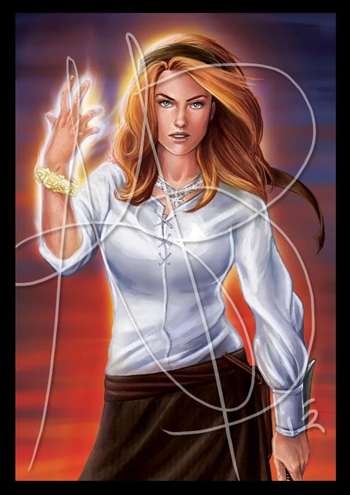 Aviendha was a Maiden of the Spear assigned to educate Rand al'Thor in Aiel ways after he became their Car'a'carn. She treated him very roughly due to her personal conflict over her attraction to him and her sense of honor regarding her close friend Elayne's nebulous relationship with him. She went on to become one of Rand's lovers as well as a powerful Wise One, and served as commander of the forces of the Light at Shayol Ghul in the Last Battle.

Tier: 9-B physically, 7-B with the One Power, far higher with the amber turtle angreal

Attack Potency: Wall level physically (Can easily kill Trollocs), City level with the One Power (More powerful than Verin using her weak angreal, which allowed her to summon a storm. Stated to rival Egwene and Elayne in the Power), far higher with the amber turtle angreal (Cadsuane, a weaker channeler than Aviendha, was able to become as powerful as base Rand when using a weak angreal, whereas the turtle angreal is noted for being strong. See: angreal)

Speed: Superhuman physically (Can easily outspeed Trollocs and keep pace with Myrddraal) with Massively Hypersonic reactions when embracing the One Power (Comparable to Nynaeve and the Forsaken)

Durability: Wall level physically, City level with One Power barriers (Can defend against offensive weaves from characters comparable to herself), far higher with the amber turtle angreal

Stamina: Very high. Can fight for hours on end without issue while channeling at full capacity.

Standard Equipment: Amber turtle angreal (after receiving it from Elayne)

Intelligence: Aviendha proved herself an excellent battlefield commander during the Last Battle, and she is noted among the Aiel for being an extremely fast learner when it comes to the One Power. She also possesses great martial skill, both unhanded and with spear and bow, due to her time as a Maiden of the Spear.

Channeling the One Power: Aviendha is an extremely powerful channeler when compared with most others, although she is not nearly as powerful as the weakest of the Forsaken. She is very skilled at weaving many flows at the same time, allowing her to activate several weaves simultaneously.

A full explanation of channeling the One Power and the numerous abilities it grants is found here, while below is a list of Power-related abilities most relevant to Aviendha specifically: