VS Battles Wiki
Register
Don't have an account?
Sign In
in: Servants (Nasuverse), Characters, Video Game Characters,
and 68 more 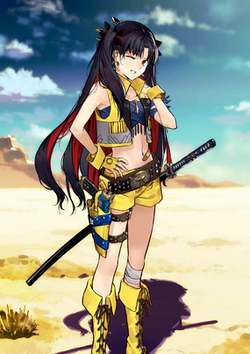 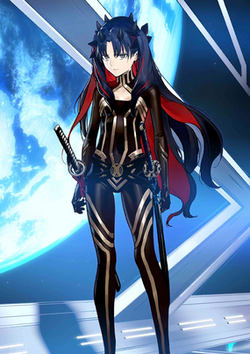 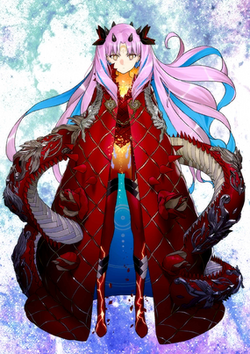 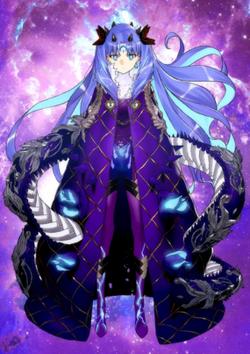 Avenger is an Avenger-Class Servant able to be summoned by Ritsuka Fujimaru in the Grand Orders of Fate/Grand Order, first appearing as ally servant in Saber Wars II event.

Avenger's true name is Ishtar, the Primordial Goddess who were demonized as Astaroth after Europe changed her name from her original name, Astarte and became furious, seeking revenge to mankind. In servant universe, she is the embodiment of "the cosmic domain where lifeform can be lived", being a sentient space-time worshipped by the ancient race of Venus.

All previous abilities in addition to Teleportation, Dimensional Travel and Space-Time Manipulation (With the help of Dark Maanna, she can create spatiotemporal bend to travel interstellar distances or even to another dimension), Creation Information Manipulation, and Soul Manipulation (Capable of creating Saber Badges at will which turns any owner into a Saber class, rewriting their saint graph, almost driving Lancers to extinction), Psychometry (Capable of scanning her surroundings with her sight alone), Resistance to Law Manipulation (Was able to temporarily resist the laws of the galaxy and fool it for a while)

All previous abilities but exponentially stronger, plus Reality Warping (Warped the entire galaxy with her will before. She also can use Authority), Law Manipulation (Her existence alone disrupts the laws of the galaxy, creating anomalous effects), Mind Manipulation (Controlled Jane's mind to not get close to her), Incorporeality (Her true form is nothing more than her domain being the space-time itself), Shapeshifting (Capable of freely changing her form depending on the opponent's perception), Deconstruction (Capable of deconstructing matter at atomic level), Resurrection Negation (Those who died in her domain will never be resurrected, killing Servant Universe Servants permanently), Transmutation (Can turn all humans in the universe to servants with thought alone), Large Size (Type 7, will eventually become Type 8), Abstract Existence (Type 1. She is formed from the concept of "the cosmic domain where life can be lived", though concepts in the Nasuverse cannot be standardized into the usual types, the Babylonian gods are concepts by nature), Immortality (Type 8, Gods can only die after all who remember them are gone), Heat Manipulation (Capable of creating heat so strong that it can be felt from another galaxy), Conceptual Manipulation (Can freely control and create her own galaxy which is conceptual in nature), Time Travel and BFR (Can send other people to different dimensions and time and likely can do it to herself), Enhanced Creation (Capable of effortlessly creating Holy Grail), Corruption (Type 2; Can curse her opponent's soul to be corrupted) and Gravity Manipulation (Compressed countless stars together to create her temple)

Stamina: Extremely High (Servants can fight for an entire day without tiring and continue fighting for as long as they have sufficient mana. Astarte, even with having fatal injuries and mentally exhausted, was able to create such an energy with her strike that she reflected Astarte Origin's beams). Limitless with Self-Replenishment (Avengers do not run out of mana so long as they have grudges to hold)

Intelligence: Ishtar is an exceptionally strong swordswoman and fighter, one of the strongest in the servant universe, surpassing even other Gods from various pantheons, and become the best when she transforms to either Ishtar Astarte or Astarte Origin. She is a great leader as well, leading a universally large organization at a (technically) young age of 14 and knows various combat skills even before she became a teenager. As a Goddess, she observed various ways lifeform can live for 50 billion years.

Authority: As a Primordial Goddess, Ishtar possess Divine Authorities, special powers distinct from Code Casts, Noble Phantasms, and Skills in that while they achieve results based on some logical process or principle, an Authority realizes a result simply because the user has the right to do so. Authorities are powers on the level of world construction, and can be powers such as event shifting, time manipulation, causality manipulation, kingdom-building and other powers on that level. The Gods originally used their Authorities during the Age of Gods to shape the world, build kingdoms and advance civilization. But as time went, humanity advanced to the point that Authorities became unnecessary. When summoned as a Servant, Ishtar likely cannot utilize her Authorities without harming and straining herself. The derivative version of Ishtar from our world possesses a total of seven Divine Authorities, and she also can take the Authorities of other Gods and Goddesses, and the primordial version of Ishtar should at least possess these as well.

Edin Shugra Quasar: Royal Crown Shining in the Primeval Universe: Space Ishtar's own Noble Phantasm. She begins by summoning the ancient Bel Maanna temple, the "testimony of the goddess" from the primordial universe, before unleashing the higher-dimensional soul that composes it and generating an entire galaxy to turn into energy, firing it as a volatile projectile with enough power to obliterate entire cosmic domains. The temple, a Baal temple built by Anat, has a horrifying shape and offensive form, or so it is said. In the Sumer-Akkad language, "Edin" refers to the sky, and is said to be the source of the Old Testament's Eden. Shugra was the crown found in said Edin, given to Ishtar when she entered the domain. Quasar refers to the modern word for interstellar objects, a cosmic domain away from the Earth, emitting an extremely strong light and being called "the brightest celestial body".

Avenger: The signature class skill of Avengers, representing the existence of one who gathers the grudges and hatred of others and takes it onto themselves. By chance, Ishtar's name of Astarte was corrupted by later Europe into the demon Astaroth, turning her from a goddess who was worshipped into a monster who was demonized. Filled with anger, pain and self-pity, her rank in this skill is an astounding EX.

Independent Action: The ability to remain independent and exist in the world without the magical energy supplied by a Master, allowing the Servant to act autonomously and the Master to save their own magical energy for spells. As an individual born as a goddess, raised as a human, and developed as a Servant, Ishtar's existence in the world takes virtually no mana, even when she's not contracted to a Master.

Magic Resistance: An innate ability that grants protection against magical effects. Unlike the Resistance effect that merely rejects Magical Energy, this ability cancels the spells altogether. Ishtar's mediocre C-rank protects her from spells with two verses or less, but will be unable to protect her from High-Thaumaturgy or Greater Rituals.

Oblivion Correction: An Avenger never forgets, attacking from beyond oblivion with greater strength than other Servants, increasing the power of their blows whenever they strike an opponent's weak points. No matter how much time passes or how many things she's exposed to, Ishtar's own hatred will never lessen.

Self-Replenishment (Mana): One of the class skills of the Avenger, allowing them to continuously replenish their mana until their task is completed.

Devil's Sugar: Even with her status as a demon paining her, Ishtar still makes full use of its "charm and excitement" with this skill. By smiling and blowing a kiss, she can increase her allies' morale and allow them to ignore any of their body's limitations to release power beyond their normal limits. Her own charm/curse is also capable of nullifying an enemy's charm when used on her allies. In a combination of the goddess of victory and the one who will destroy humanity, it could be called a devil's charisma.

Goddess' Divine Core: A skill that denotes Ishtar as a perfected goddess from birth, it preserves the absoluteness of her mind and body, repelling all mental interference while preventing her body from ageing or changing no matter how many calories she consumes. It's a composite skill that also includes divinity allowing her to reduce "Anti-Purge defense" in proportion to the rank of her Divinity, allowing her to break through defensive abilities such as Protection of the Faith and Saver's Enlightenment of the Sacred Fig. Many goddesses can be derived from Ishtar - such as Astarte and Anat. As the one who inherits the prototype of those goddesses, the divine core of "the goddess of fertility and war", this skill's rank is at A++, nearly its highest peak.

Multiple Starling: The only one great crown. By combining the many crowns of the "heaven's great queen goddesses" - the goddesses that derive from Ishtar - she can recreate its original form.

Venus Driver: A skill denoting Ishtar's nature as the one who moves the planet Venus and controls the idea of beauty. Through blessings from Venus, her Noble Phantasm can become even stronger and change its properties in various ways. It is a fitting skill for a "primordial goddess" that many goddesses are derived from. This is likely related to the Archer version of Ishtar's authority over Venus.