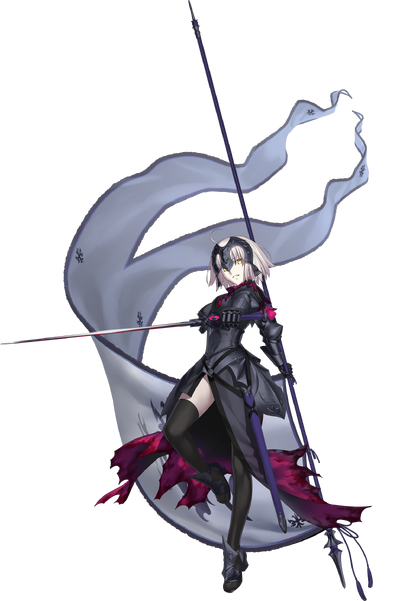 Avenger, originally appearing as Ruler in the Orléans singularity, is a Servant of the Grand Orders, capable of being summoned by Ritsuka Fujimaru after her apparent demise in Orléans.

Her true name is Jeanne d'Arc Alter, the altered state of the original Jeanne Alter, who was born from a wish of the insane Gilles de Rais, an ally of hers in life, to sow claim vengeance against those who killed her. A "draconic witch who rose from her grave to avenge herself upon France", much of Jeanne Alter's personality has been formed from Gilles' own insane biases and feelings, turning her into an Avenger who exists for the solely for vengeance, never forgetting the agony she underwent when burning at the stake.

Powers and Abilities: Superhuman Physical Characteristics, Expert Swordswoman, Empowerment (Jeanne Alter is empowered by all negative emotions directed at her), Absorption (Can eat others and assimilate their flesh into her body, allowing her to gain their memories and intelligence), Fire Manipulation, Minor Mind Manipulation with Charisma, Summoning (Can summon and control dragons, including Fafnir), Attack Reflection with La Grondement Du Haine, Servant Physiology, Rage Power with Avenger, Limited Resistance to Memory Manipulation with Oblivion Correction

Attack Potency: Island level (Has A-rank strength, and should be at least comparable to her regular self, who she fought against in Orléans), Small Country level with La Grondement Du Haine (The flames produced by this Noble Phantasm are comparable to the breath of a first-class Dragon, a Phantasmal Species powerful enough to easily kill most Servants, thus it should be comparable to Fafnir)

Speed: Massively Hypersonic (Can keep up with her regular self and Chaldea's other Servants)

Stamina: Very High (Servants can fight for an entire day without tiring and continue fighting for as long as they have sufficient mana. Jeanne Alter's self-replenishing stores of mana allow her to fight even longer over the course of prolonged battles)

Range: Extended melee range, much further with la Grondement Du Haine. Multiversal+ with fire manipulation (Can set Chaldeas's systems on fire while in a singularity)

Intelligence: While corrupted into destructive sadism by the nature of the wish that created her, Jeanne Alter is no less skilled and intelligent than her regular counterpart, leading her soldiers into battle by terrifying them with her unnatural, unholy charisma.

Weaknesses: Jeanne Alter cannot fight in spirit form. As a Ruler, her Magic Resistance is tailored towards protecting her from assault, diverting magical attacks as opposed to negating them, putting her allies at risk, and is less effective against illusions and the Sacraments of the Church.

La Grondement Du Haine (Roar of Hatred): Roar, O' Rage of Mine: The Noble Phantasm of Jeanne d'Arc Alter, a corrupted, tattered flag as opposed to the holy weapon used by her regular self. Like Luminosité Eternelle, it forms a barrier that repels all harm, physical or magical, but unlike Luminosité Eternelle, la Grondement Du Haine then reflects it at Jeanne Alter's opponent. Regardless of the form of attack, whether it is a slash, a Noble Phantasm, or a curse, la Grondement Du Haine reflects it, converting it into physical power that grows more powerful if one of Jeanne's allies have been killed. Based on Jeanne's torturous death in life, the flag can also manifest flames by drawing upon the grudges in Jeanne Alter's surroundings, turning them into a roaring fire that burns her opponents to ash with heat comparable to that of a first-rate dragon. As they are burnt to cinders, enemies are also impaled on numerous stakes, one after the other, raising them up into the fire.

Avenger: The signature class skill of Avengers, representing the existence of one who gathers the grudges and hate of others and takes it onto themselves. Jeanne Alter converts damage and malice turned on her into magical energy, growing in power the more she is despised by those around her.

Oblivion Correction: An Avenger never forgets, attacking from beyond oblivion with greater strength than other Servants, increasing the power of their blows whenever they strike an opponent's weak points. No matter how much time passes and no matter what wondrous things she is exposed to, Jeanne Alter's hatred will never lessen.

Self-Replenishment (Mana): A skill that allows Avenger to replenish her magical energy over time as long as her grudge remains, and as Jeanne's grudge will never fade, this will effectively be active indefinitely. Its effectiveness is also on a higher level than most due to her nature as an existence born from the Holy Grail.

Charisma: The ability to command others and lead them into battle, boosting their morale and combat performance in the process. Jeanne Alter's corruption and newfound malicious nature has caused her rank to drop to an abysmal E, which, though it still grants her a supernatural level of charm that makes it easy to lead others, will inevitably ruin their morale.

Dragon Witch: A skill granted through the wishes of the insane Gilles de Rais, Jeanne Alter has a deposition opposite that of dragon-slaying saints like Saint George, allowing her to commune with and control virtually any dragon with a wave of her flag while also allowing her to ride dragons as powerful as Fafnir.

Ephemeral Dream: A skill that represents Jeanne Alter's nature as an illusion born from the wishes of an insane man, resulting in her incredible power. However, she cannot exist forever, and she will fade away after she is defeated.

Self-Modification: The ability to merge one's own flesh with body parts of others. The higher the ranking in this skill, the further away one is from being a proper hero. In Jeanne Alter's case, her grade rank in this skill is EX, a special one made due to her birth and remodeling of the Grail out of Gilles wish, resulting in a Jeanne completely opposite to the original and becoming that of the Chaotic Evil alignment. 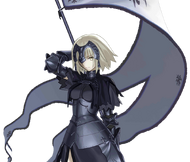 Jeanne Alter when initially summoned as a Ruler 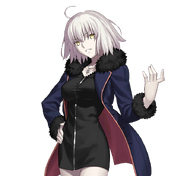 Jeanne Alter during the Shinjuku singularity

Jalter as a Berserker class in her swimsuit