VS Battles Wiki
Register
Don't have an account?
Sign In
Advertisement
in: Tier 6, Tier 6-C, Characters,
and 35 more 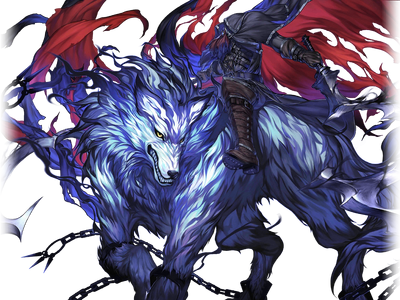 Avenger of Shinjuku is an Avenger-class Servant able to be summoned by Ritsuka Fujimaru in the Grand Orders of Fate/Grand Order. They debut in the Shinjuku Sub-Singularity as "Rider of Shinjuku".

Lobo originates from the 1898 novel "Wild Animals I Have Known". Known as the King of Currumpaw, he rampaged across the Currumpaw Plains for years, slaughtering thousands of farm animals while paying no mind to the attempts to stop him. Ultimately, the hunter Seton managed to capture Lobo after killing his mate, Blanca, and using her body as bait to lure him into a trap. Lobo soon died, refusing any food provided to him.

Hessian was a German mercenary employed by the British during the American Revolutionary War in the late 18th century to fight against America. During a battle, his head was blown off by a cannon, and he began wandering around the town of Sleepy Hollow, not realizing he was dead. He would later become the Headless Horseman of "The Legend of Sleepy Hollow".

Due to their initial instability, they are forced to merge with several Phantoms, including Dr. Jack Griffin, the Invisible Man. However, he does not have an outward effect on Hessian Lobo in terms of appearance or personality.

Powers and Abilities: Superhuman Physical Characteristics, Fire Manipulation, Statistics Amplification, Animal Manipulation (Can converse with animals and put them directly under his command), Empowerment (Hessian Lobo becomes more powerful by taking on the grudges of others), Invisibility (His Transparency skill turns his body invisible and makes it impossible to detect where he is), Can manifest scythes directly from his body, Limited Reality Warping (His Noble Phantasm slightly distorts the World to make it easier to decapitate his enemies), Rage Power with Avenger, Servant Physiology, Limited Resistance to Memory Manipulation with Oblivion Correction

Attack Potency: Island level (Boasts A+-Rank Strength, making him equal to Heracles. Easily defeated Jeanne Alter and almost killed her. Fought against Saber Alter multiple times, only being bested after having his mana reserves diminished. In his initial, weaker Rider form, he killed a Super Chimera, a Phantasmal Beast that gave James Moriarty and Saber Alter trouble, with a single bite), higher with Monstrous Strength (Briefly raises his Strength by one rank)

Speed: Massively Hypersonic (Possesses A+-Rank Agility, making him one of the fastest Servants)

Stamina: High (Servants can fight for an entire day without tiring and continue fighting for as long as they have sufficient mana. His Self-Replenishment skill also allows him to gather more mana over time without assistance from his Master)

Intelligence: Despite his form as a feral beast, Hessian Lobo is intelligent and combat-savvy, fighting against Saber Alter, an extremely accomplished swordsman of the Round Table, and Jeanne Alter on even ground, evading their attacks and retreating when overwhelmed. Additionally, he makes excellent use of his skills when the situation calls for it, activating his Transparency to get the drop on Chaldea's forces and using The One Who Wears Death to enhance the power of both his attacks and Noble Phantasm. However, he will also rush in blindly if he is presented something that reminds him of Blanca.

Frieren Scharfrichter (Cold Executioner): Execution of the Far-Away One: An instant death Noble Phantasm, and a manifestation of Hessian Lobo's desire for revenge. By creating a slight deviation in the World, Hessian Lobo makes it so "the opponent's head is easier to cut", allowing him to behead his enemies with a single swipe regardless of their durability.

Avenger: The signature class skill of Avengers, representing the existence of one who gathers the grudges and hatred of others and takes it onto themselves. At A-Rank, Hessian Lobo can gather these grudges easily, and converts damage he receives into power.

Oblivion Correction: An Avenger never forgets, attacking from beyond oblivion with greater strength than other Servants, increasing the power of their blows whenever they strike an opponent's weak points. Lobo's hatred for mankind will never disappear, akin to a scar on human history.

Self-Replenishment (Mana): One of the class skills of the Avenger, allowing them to continuously replenish their mana until their task is completed. As long as he remains in a world of humans, Hessian Lobo will continue to destroy them.

Animal Dialogue: The ability to converse with animals who don't speak a "language of words". As Lobo is an animal himself, he is capable of fully communicating with and commanding lower lifeforms than himself, excluding humans, giving him an A-Rank in this skill.

Fallen Demon: A skill given to mystical beasts and fallen ones, falling slightly short of Natural Demon and representing a man-made monster that could not be replicated by natural means. It increases Hessian Lobo's defense and resistance to abnormal effects.

The One Who Wears Death: A skill that manifests both the demonic nature of Hessian and the vengeful desire of Lobo. It takes the form of a tangible armor that can be used for offense by manifesting scythes.

Transparency: A skill that turns Hessian Lobo's body invisible as a result of absorbing the Invisible Man. Even if one were to decipher that he is nearby, it would be impossible to completely figure out where he is. Normally, it would also amplify the user's ferocity, but Hessian Lobo's rage cancels out any additional effects.

Berserker (Minamoto no Raikou) (Fate/Grand Order) Minamoto no Raikou's Profile (Base Raikou were used, both had a prior knowledge and in-characters, place located in Kyoto Capital City, and Starting Range: 50 meters)