VS Battles Wiki
Register
Don't have an account?
Sign In
Advertisement
in: Tier 6, Tier 6-C, Characters,
and 42 more 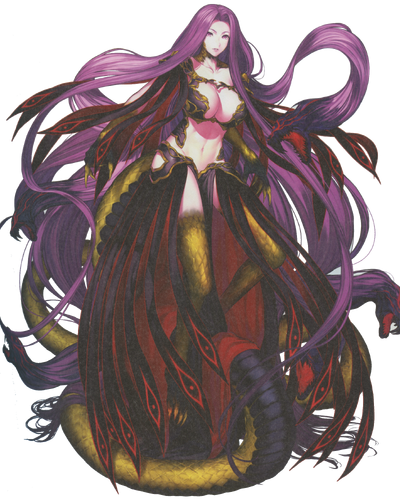 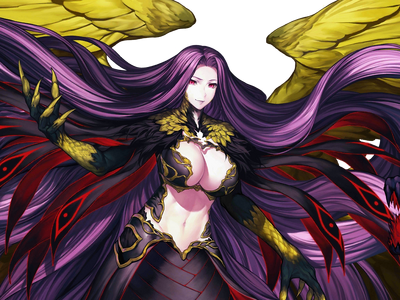 Avenger is an Avenger-class Servant able to be summoned by Ritsuka Fujimaru in the Grand Orders. She first appears as an antagonist in Babylonia, masquerading as Tiamat and drawing upon her power for herself.

Her true name is Gorgon, the youngest of three goddesses who was once known as Medusa before she gave up her divinity and became a monster. She is on the boundary of fully transforming into her truest, final monstrous form, but even in this incomplete state, she is worthy of the title of Queen of Magical Beasts.

Powers and Abilities: Superhuman Physical Characteristics, Large Size (Type 2 in Babylonia, otherwise her size is the same as Medusa's), Enhanced Senses (Her non-sight senses are much more precise and potent than her sight, allowing her to act normally when blinded by Breaker Gorgon), Avatar Creation (during the Summer Jailbreak event, Gorgon created a projection of herself to travel outside. This projection was capable of fighting a team of several powerful servants, and almost instantly reappeared after being destroyed), Energy Manipulation, Fear Manipulation, Hair Manipulation, Poison Manipulation, Transformation, Transmutation and Absorption with Pandemonium Cetus (Instantly liquefies organic matter, which Gorgon absorbs, and she can summon small-scale reproductions of Blood Fort Andromeda to liquefy others), likely Limited Conceptual Manipulation (The original Blood Fort Andromeda uses a conceptual barrier, and her reproductions should do the same), Illusion Creation with Breaker Gorgon, Petrification, Statistics Amplification, Statistics Reduction, Status Effect Inducement, Rage Power and Empowerment with Avenger, Servant Physiology, Resistance to Corruption, Limited Resistance to Memory Manipulation with Oblivion Correction

Attack Potency: Island level (She has A++ rank Strength, the same rank as Asterios, a level of Strength impossible for humans, and is thus superior to Heracles. With her Class Card installed, Illya fought on par with Beatrice, who had easily overpowered her when she had Heracles installed), Island level+ with Pandemonium Cetus (An A-rank Anti Army Noble Phantasm, which should be comparable to this). Cybele, Pandemonium Cetus, and her venom can all ignore conventional durability

Speed: Massively Hypersonic (Can keep up with Chaldea's Servants in combat)

Stamina: Very high. Other Servants can fight for nearly an entire day without stopping, and Gorgon can fight on even when grievously injured. Limitless with Self-Replenishment

Intelligence: At the cost of her divinity and whatever humanity she once had, Gorgon has ascended into a pure monster with an exceedingly high intellect that far surpasses that of most humans. She has retained the skill of her regular self, but she has lost much of her sense and become something incomprehensible to humans, something that cannot be truly understood or reasoned with, and is completely consumed by her own desire for vengeance

Pandemonium Cetus: Forced Seal, Pandemonic Temple: Gorgon's Noble Phantasm, a more powerful version of Blood Fort Andromeda, used as a weapon on a grand scale rather than a Bounded Field. When Gorgon releases its True Name, she renounces her last vestiges of her divinity along with it, transforming into the form she took at the end of her life as the Queen of Magical Beasts, Gorgon. In this form, she fires a massive beam of energy that instantly liquefies all organic matter caught in the blast, just like Blood Fort Andromeda.

Breaker Gorgon: Self Seal, Dark Temple: A powerful Bounded Field used to seal Gorgon's powerful Mystic Eyes. While it nullifies her sight, her other senses are keen enough that this is no issue. It can also be used to seal magical properties and trap a target in their mind, within a nightmare world where they lack any special properties they may have had in the outside world.

Avenger: The signature class skill of Avengers, representing the existence of one who gathers the grudges and hate of others and takes it onto themselves. Gorgon converts damage and malice turned on her into magical energy and grows in strength using it.

Oblivion Correction: An Avenger never forgets, attacking from beyond oblivion with greater strength than other Servants, increasing the power of their blows whenever they strike an opponent's weak points.

Self-Replenishment (Mana): A skill that allows Gorgon to replenish her magical energy over time.

Demon of Mutation: A skill reflecting Gorgon's existence as a once divine being that eventually devolved into a demonic beast. This skill vastly boosts her abilities as a Servant due to emphasizing her past existence, granting her an exceptionally high rank in Strength and Endurance, one impossible for a human body to retain. It also combines the effects of Self-Modification and Battle Continuation, allowing Gorgon to modify her own body and continue fighting even after she is grievously injured.

Monstrous Strength: A skill that permits the augmentation of its holder's Strength parameter by one rank for a time limit determined by the ranking of this Skill, an ability normally possessed to those who nature are of that of a Monster or Demonic Beast. At a rank of A, it allows Gorgan to increase her already tremendous strength to an even higher level to give her an edge in battle.

Mystic Eyes: The possession of Mystic Eyes, abnormal eyes that can influence the World. Gorgon possesses the Mystic Eyes of Petrification, Cybele, which allow her to petrify anything within her line of sight, even those who aren't looking at her or those with their eyes closed, as they are still looking upon Gorgon with their mind's eye.

Anyone without considerable Magic Resistance will be instantly petrified, and those who still don't have enough to completely negate it will be slowly petrified. Even those who have enough resistance to avoid this will be weakened, taking penalties to all their stats. Gorgon cannot control them on her own, requiring Breaker Gorgon or Mystic Eye Killers to do so, though it is possible to cancel the effect if it has not reached a certain point by looking away.

Scream of Fear: A monstrous roar that stirs up the instinctive awe and fear in the hearts of others, bestowing penalties to Gorgon's opponent's defenses and plaguing them with fear and other status conditions.