VS Battles Wiki
Register
Don't have an account?
Sign In
Advertisement
in: Tier 4, Tier 4-A, Tier 2,
and 37 more 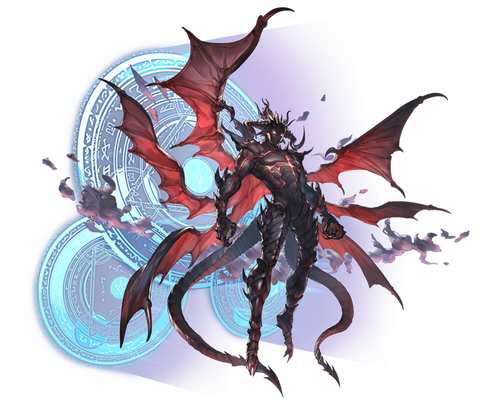 Avatar is Lucilius' legacy. A twisted primal beast created by melding countless cores of the original primal beasts. An embodiment of pure destructive impulse with no will of its own. Lucifer's death broke the seal imprisoning it, unleashing its rage on the skies.

Powers and Abilities: Superhuman Physical Characteristics, Primarch Physiology, Berserk Mode, Energy Projection, Damage Boost, Large Size (Type 3; His special attack is roughly thrice his size and is easily seen from the surface of the earth), Durability Negation (Tides of Chaos ignores conventional durability), Damage Reduction and Statistics Reduction with Daedalus Pierce, Statistics Amplification (Attacks and speed increases with Dark Motives unless significantly harmed), Aura of his presence causes chaotic lightning to appear in Canaan), Darkness Manipulation (Capable of casting shadows across the skies and losing all its light), Chaos Manipulation (Its presence turned the whole airspace of Canaan into a chaotic battlefield), Void Manipulation(A weapon created from his body can dissolve light into nothingness and is he concept of void itself), Power Nullification (He can blot out all the light in an area targeted by his attacks), Mind Manipulation and Madness Manipulation (Type 1 and 2; his very essence drives even Archangel into madness making them hellbent into destruction), Soul Manipulation (can taint and consume souls), Multiple Selves (Type 1, 2 and 3; A Primal beast created from merging all other Archangels and Primarchs cores merging their souls, mind and physical body altogether, due to innumerable amount of core it has, control is impossible and Avatar becomes an entity hellbent only at destruction), Resistance to Power Nullification (Dark Motives and majority of his ability are resistant to nullification)

Attack Potency: At least Multi-Solar System level (Zechariah a weapon possessing a fraction of his power can swallow the light until it becomes a Starless Void), likely Universe level+ (Was so strong that Lucifer couldn't kill it and was sealed instead and is hinted to be created along with Metatron to Destroy Etemenanki from inside which was also achieved when Lucilius and Sandalphon at their strongest fought inside Etemenanki. Belial was able to keep up with Sandalphon as Supreme Primarch by absorbing a fraction of its power) can ignore durability with special attacks

Range: Thousands of Kilometers to Planetary (Archenemy can reach far and he can throw it outside of orbit)

Intelligence: Animalistic (An embodiment of pure destructive impulse with no will of its own)

Weaknesses: Weak to Light based attacks. He can't use some of his special attacks when Overdrive is broken. It being abstract is only applicable when its power is drained completely, and this is more a downside than anything else, as Primals in their abstract forms are completely powerless.