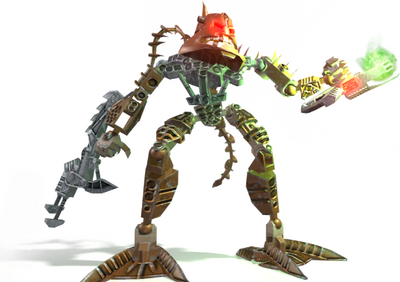 Avak is a member of the rogue group of Dark Hunters known as the Piraka. Rebellious and disdainful of any attempts to control him, and is distrusted by the other Piraka. He is, however, a highly skilled engineer.

Powers and Abilities: Superhuman Physical Characteristics, Enhanced Senses (X-ray and Telescopic vision), Stone Manipulation (Only in the presence of other Skakdi), Mind Manipulation (Can enslave others with Zamor Spheres), Forcefield Creation (Can create powerful forcefields to imprison enemies), Longevity

Attack Potency: City level+ (Can fight against the Toa Inika and Toa Nuva, such as Pohatu, who can turn Odina Fortress to dust).

Range: Extended melee range, Kilometers with his abilities (His range should be comparable to a Toa's, such as Pohatu, who destroyed the massive Odina Fortress with a single timed Stone Blast)

Intelligence: Avak is a highly skilled engineer who could make tools and weapons out of virtually anything.

Weaknesses: Avak can only use his elemental powers when around other Skakdi. He's very weak in hand to hand combat.

Retrieved from "https://vsbattles.fandom.com/wiki/Avak?oldid=6520522"
Community content is available under CC-BY-SA unless otherwise noted.