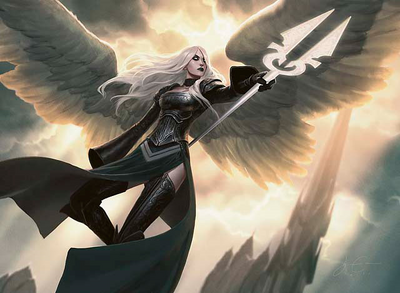 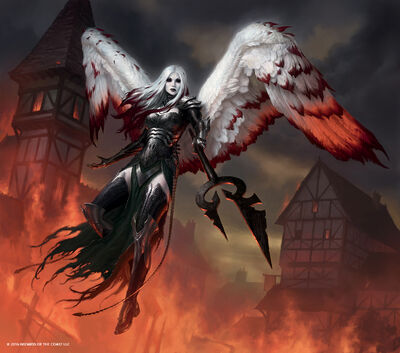 Avacyn is an archangel of Innistrad, created by planeswalker Sorin Markov in order to ensure a balance between light and darkness on the plane and act as a protector to humanity. She was entrusted with maintenance of the plane by Sorin, and for a while was able to maintain relative equilibrium between the forces of darkness and the forces of light. So great was her influence that she inspired a church in her namesake and came to command a host of other angels. However, she was challenged by the demon Griselbrand, and after days of fighting both ended up sealed in the Helvault, a creation of Nahiri. This would upset the precarious balance of the plane, and for a while dark forces such as vampires and werewolves ran rampant. After the destruction of the Helvault, Avacyn was able to lead humanity to an age of prosperity lasting about a year, before succumbing to the influence of Emrakul and ultimately leading genocidal crusades against humanity, having become the very thing she was created to protect against.

Attack Potency: At least Small Country level+ (Defeated both Jace and Tamiyo simultaneously, with it being noted that she was capable of one-shotting the latter if she got a decent hit with her spear), possibly Multi Solar-System level (Hurt Sorin. She alone is the reason humans on the plane of Innistrad are able to survive. Fought Griselbrand on even terms, a Demon Liliana Vess required the use of the Chain Veil to destroy. Using this same power, Liliana could somewhat hurt Emrakul, though ultimately to no avail)

Stamina: Extremely high (Fought Griselbrand for days. Able to singlehandedly protect humanity across an entire plane. After being physically beaten down by Sorin, had recovered her strength in mere seconds and would be prepared to fight again had she not been undone)

Range: Extended melee range with her spear, likely dozens of meters with most spells, far higher with others (The cursemute spread her power throughout the entire plane, purifying numerous curses and augmenting the curse of lycanthropy afflicting the plane)

Standard Equipment: Her Spear, her Collar and Mask

Intelligence: High. Leads armies of angels across the entire plane of Innistrad. Knows a variety of powerful spells, able to counteract the effects of ancient curses.

Weaknesses: Susceptible to the corruption of Emrakul. Could not hurt Sorin at first, due to him being her creator, though she was able to get over this weakness when she saw him as a monster.