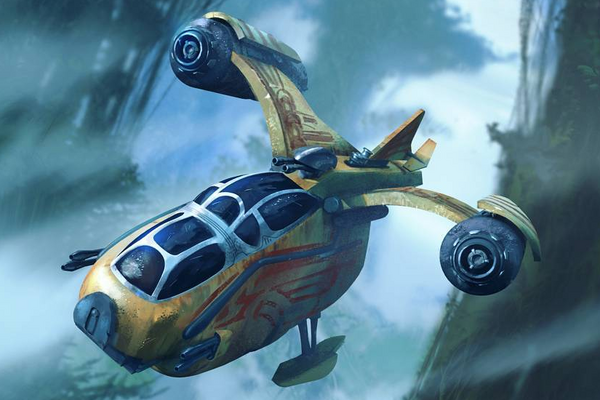 The Auzituck anti-slaver gunship was a decently powerful gunship manufactured by the Kashyyyk-based Appazanna Engineering Works. The Wookiees, being a race that is a common target of slavers and even deluded big game hunters, designed and built this gunship for the elite Wookiee warriors of Kashyyyk to use in anti-slaver and rescue operations. The ship was built out of Wroshyr wood, which is as strong as alloys used for warships and tough enough to withstand heavy laser cannon fire, and equipped with three Sureggi twin laser cannons, which were powerful enough to rival heavy starfighter grade laser cannons.

Needed prerequisite for use: At least one trained pilot.

Attack Potency: Town level+ with its laser cannons (Capable of punching through the hulls of craft as large and durable as the likes of the Gozanti-class Cruiser and other craft with durability in the same league as its own)

Speed: Subsonic+ atmospheric speed (950+ km/hr). Can accelerate continuously to Sub-Relativistic+ speeds in space (Comparable to Aphra’s Ark Angel, an armed light freighter, and swifter than the Arquitens-class Light Cruiser). Massively FTL+ travel via hyperspace (Hyperdrive-class never specified. But it should be noted that hyperspace travel speeds of thousands of light-years per day is possible even for Class 5 hyperdrives, which are considered slow by modern standards. This vessel is most likely equipped with something far superior)

Durability: At least Town level+ (Capable of damaging and grounding the Millennium Falcon by ramming and without suffering fatal damage itself. This indicates that it is overall comparable in durability)

Retrieved from "https://vsbattles.fandom.com/wiki/Auzituck_Anti-Slaver_Gunship?oldid=4615953"
Community content is available under CC-BY-SA unless otherwise noted.