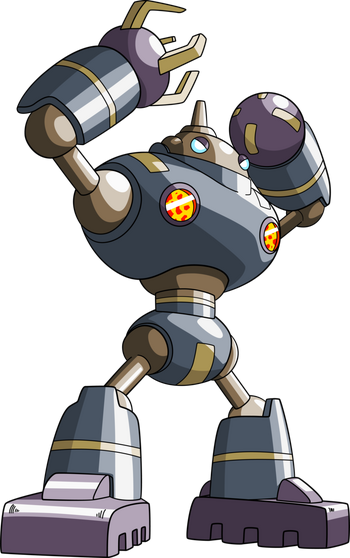 Magetta (マゲッタ, Magetta) is a Metal Man from Universe 6, a race that is said to exist as well in Universe 7. He is a member of Champa's team.

Powers and Abilities: Superhuman Physical Characteristics, Ki Manipulation (Can be used defensively and offensively, to strengthen his skin or to fire ki blasts, which can home in on targets, and form defensive barriers), Statistics Amplification, Magma Manipulation, Can possibly create dimensional rifts and destroy space-time and pocket dimensions with his energy via powerscaling

Speed: Massively FTL+ (After Magetta started to heat up, Vegeta had trouble dodging his attacks)

Striking Strength: Universal (Vegeta was wary of fighting him in close combat)

Stamina: Depends on the amount of 'fuel' he consumes (Appears to work like a steam locomotive)

Weaknesses: Turns extremely sad if insulted in the slightest.