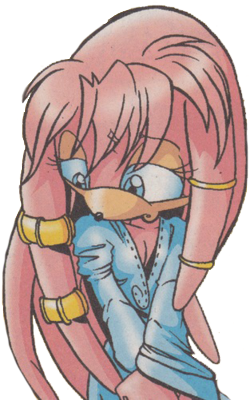 Aurora was originally an Echidna researcher who researched and studied the Chaos Force alongside her husband, Enerjak. Their research brought the attention of the Ancient Walkers, who allowed them to ascend into the Chaos Force and continue their research, however, Enerjak became corrupt with power and turned against Aurora-La and the Ancient Walkers. After Enerjak spirit was scattered across the Chaos Force, she changed her name into just Aurora and created the three Echidna Tomes, after this she worked to spread enlightenment throughout the world.

Attack Potency: Multiverse level+ (Became one with the Chaos Force, a realm outside the space-time of infinite universes)

Lifting Strength: Immeasurable (As she is a higher-dimensional being)

Intelligence: Supergenius. Prior to ascending to the Chaos Force she was a scientist along with Enerjak. Her knowledge increased further after becoming one with the Chaos Force.