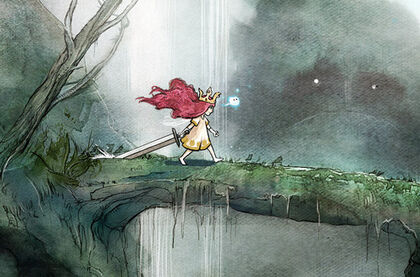 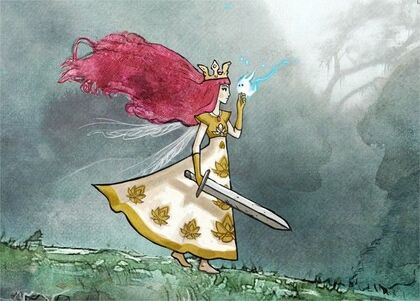 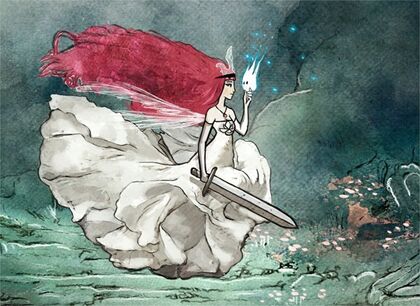 Once the sole daughter of the Duke of Austria whose mother died at a young age, Aurora would follow in her footsteps before too long, passing away from a chill wind that spread into the castle and killed her in her sleep. However, rather than simply being dead, she soon awoke in the kingdom of Lemuria, a fantastical fairy tale universe that she originally believed to be a dream. However, it was not long before Aurora learned of her death, and how the land of Lemuria had been conquered by the evil usurper queen Umbra, who ripped the sun, moon, and every single star out of the sky and sealed them away within her daughters and within the Abandoned Monastery. From there, she would venture forth, gathering allies and soothing the pains of the people on the way, to save the reality of Lemuria, kill Umbra, and reunite with her father, and to save Austria from the coming flood. As it turned out, however, the path she would take was not so simple...

Name: Aurora, The Child of Light, "Princess", The Savior of Lemuria

Speed: Hypersonic+ with at least Massively Hypersonic+ reactions and combat speed (Faster at this point than the Living Mountain, which can rise above the clouds in under one second easily; can dodge close-range natural lightning and sound-based attacks, can outpace arrows in flight) | FTL (On par with her enemies, most of which can dodge and keep pace with her multi-directional, light-based attacks) | FTL with Massively FTL+ reactions and combat speed (On-par with Umbra, who pulled the Sun, Moon, and all the stars of Lemuria from the night sky in a maximum timeframe of 2 years; a bare minimum of tens of billions of times the speed of light, likely considerably higher)

Lifting Strength: Likely Class 10 (Roughly as strong as monsters who are this strong through size alone) | Class 25+ (Capable of taking on Nox) | Class T (At this point is the physically strongest being in the series, up to and including the living mountain)

Stamina: Superhuman (Has been shown to fight through multiple injuries from multiple fights on end with little sign of being impaired by pain; very soon after enduring physical and emotional torture from Umbra for an extensive period of time, got back up and began fighting with no handicap)

Standard Equipment: The Sword of Maththildis, A variety of Oculi (Various gemstones that can be equipped for bonus stats and effects, one Brilliant of each plus one Princess Stone and one Erin's Stone is standard equipment; only one Oculi can be equipped in each three slots [Weapon, Armor, Accessory]), Igniculus (An elemental companion in the form of a firefly), her crown (Which prevents harmful curses, magic, and the like from affecting her), her flute (which, when played, eases emotional pain and sorrow in other beings)

Intelligence: Gifted, especially for her age; has been shown multiple times to solve the puzzles she encounters almost instantly in-game

Weaknesses: Severe emotional stress/shock can cause her to drop her guard, has a limited pool of MP to draw from when casting spells (although this is rarely a problem given her ability to replenish MP naturally with Igniculus), somewhat inexperienced (although still highly experienced in comparison to other people her age)

Igniculus: Not technically a technique or ability, but is a part of Aurora's combat style. This elemental in the form of a firefly is Aurora's primary companion, and although he is a separate thinking entity, he does not actively provide outside help, instead of acting entirely under Aurora's direction in combat. By expending its Light Energy, he can heal gradually Aurora or her allies, or alternatively can blind enemies, slowing their actions. He can also use his Light Energy to activate special switches/buttons and open special containers, and like Aurora can fly. When his Light Energy runs low, although it gradually refills over time, he can refill it by gathering Wishes, a mysterious energy that seemingly forms on plant life. Doing so also refills some of Aurora's HP and MP as well.

Retrieved from "https://vsbattles.fandom.com/wiki/Aurora?oldid=4107293"
Community content is available under CC-BY-SA unless otherwise noted.