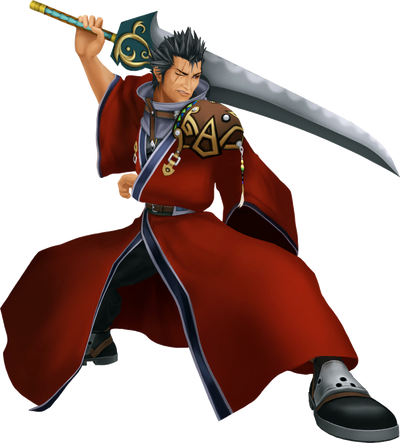 Auron is the warrior Hades calls upon to defeat Hercules. Because of his past, Auron refuses to see himself as a hero.

Age: Below 35 (Several years younger compared to his mainstream counterpart)

Powers and Abilities: Superhuman Physical Characteristics, Possibly Immortality (Types 1 and 2) and Self-Sustenance (Type 2), Non-Physical Interaction (Can harm Heartless), Weapon Mastery, Is able to hold on in a fight after being comboed via Once More, Magic, Healing, Air Manipulation, Flight, Resistance to Absorption, Death Manipulation (Unaffected by Heartless, which passively kill and absorb things around them), Data Manipulation (Ansem The Wise stated that the "heart" cannot be contained by data, and that the process itself would be incalculable), Existence Erasure (Can take hits from Heartless, which can do this with any attack)

Attack Potency: At least Large Star level (Battled Hercules to a standstill (and was winning), can keep up with Sora and others against Hades)

Speed: Massively FTL+ (Kept up with Hercules, Sora and others of this speed)

Retrieved from "https://vsbattles.fandom.com/wiki/Auron_(Kingdom_Hearts)?oldid=6036735"
Community content is available under CC-BY-SA unless otherwise noted.