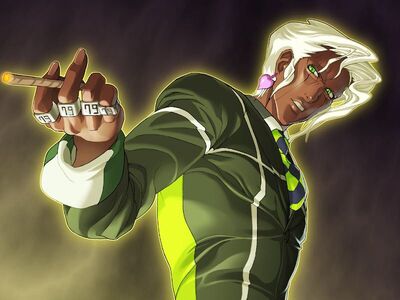 Powers and Abilities: Superhuman Physical Characteristics, Enhanced Senses and Cosmic Awareness (Sorcerers can expand their mind and senses to the point they can feel everything in the universe), Information Analysis (Can analyse his target magick, allowing him to find information about their nature and their weak points), Reality Warping (Magick is the fundamental constuent of reality), Information Manipulation (Magick is the act of manipulating information that makes up all existence and make one's own law that disregard reality itself), Law Manipulation (Sorcerers can impose new laws on the world), Power Nullification (Capable of breaking the effects of spells and even breach through barriers), Can attack on a spiritual, mental and conceptual level with Magick (Magick can affect one on a spiritual, mental and conceptual level), Magic, Energy Manipulation, Forcefield Creation, Summoning (Of his Deus Machina, Legacy of Gold), Immortality (Type 3 and 4) and Regeneration (High-Mid) via Cthulhu, can use Telepathy for communication, Metal Manipulation (Controls several dozen slabs of gold that allow him to shoot and even reflect lasers. Able to create a prison of gold by using them), Resistance to spiritual and mental attacks (Shrugs off the heavy toll on his mind and soul from using Magick)

Attack Potency: Island level (Equal to Black Lodge Sorcerers who are capable of destroying Dagon and other similar entities in one attack. Superior to mid-game Kurou Daijuuji) | Universe level (holds Cthulhu power which is not only universal but continues growing infinitely due to its cancer)

Durability: Island level normally and with barriers (Superior to mid-game Kurou who can tank Dagon attacks) | Universe level (Equal to Sorcerers in Black Lodge who can fight against and even tank Sandalphon attacks)

Standard Equipment: His Deus Machina Legacy of Gold and the Grimmoire The Golden Bough

Intelligence: Genius level. One of the two scientists and weapon designer of Black Lodge, second only to Doctor West, hijacked and almost conquered the entire world through the use of C Project, the mastermind behind Anticross' betrayal to Master Therion.

Weaknesses: Arrogant, suffered from a god complex after gaining the power of Cthulhu

Retrieved from "https://vsbattles.fandom.com/wiki/Augustus?oldid=6228694"
Community content is available under CC-BY-SA unless otherwise noted.