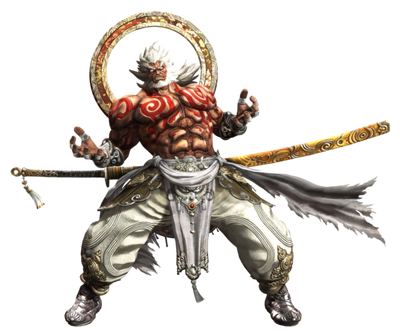 Augus (オーガス, Ōgasu) was one of the Seven Deities and also Asura's former friend and mentor. His Mantra Affinity is Greed.

Attack Potency: Large Planet level (Is far stronger than Wyzen, traded blows with and easily damaged Vajra and Six-Armed Vajra Asura, who had years before defeated the former in battle, fought against Deus in the past)

Speed: Sub-Relativistic (Crossed the distance between the Moon and Gaea in less than a minute) with FTL combat and reaction speed (Easily capable of keeping up with Asura in combat, who has been able to dodge Vlitra's lasers)

Standard Equipment: His odachi/nodachi "Wailing Dark" (This sword can extend to reach at least 12,800 kilometers in length)

Intelligence: Above Average (A very skilled fighter and the former mentor of Asura)

Weaknesses: Augus is cocky and arrogant, and enjoys fighting so much that he may intentionally prolong a battle; he refuses to use his sword on anything he does not see as "worthy"

Retrieved from "https://vsbattles.fandom.com/wiki/Augus?oldid=7050923"
Community content is available under CC-BY-SA unless otherwise noted.