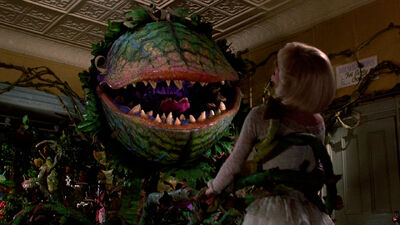 Audrey II, as named by Seymour Krelborn, is an alien plant he purchased from a Chinese flower shop during a total eclipse of the sun. Through this easily manipulated and submissive man, Audrey II was able to get the human blood she needed to grow, becoming more and more powerful...

Age: A couple months at most

Attack Potency: Below Average level (A small, harmless potted plant) | Wall level (Shattered a counter with a vine and brought down Mushnik's store by knocking out supports) | At least Small Building level (Other Audrey II's became large enough to destroy parts of buildings and consume trains in a single bite)

Speed: Unknown | Below Average Human (Can only slowly drag herself across the ground) with Normal Human combat speed (She can easily keep up with humans) | Normal Human

Lifting Strength: Unknown | Above Average Human (Briefly lifted Seymour with her vines) | Class M (Large enough to fit a train in her mouth)

Intelligence: Audrey II is remarkably cunning, using her advanced intelligence to manipulate and sweet-talk others into feeding her. She was able to use a phone and a handgun with surprising dexterity.

Weaknesses: In her youth, Audrey II is dependent on others for protection, travel, and food.