VS Battles Wiki
Register
Don't have an account?
Sign In
Advertisement
in: Tier 9, Tier 9-B, Characters,
and 32 more 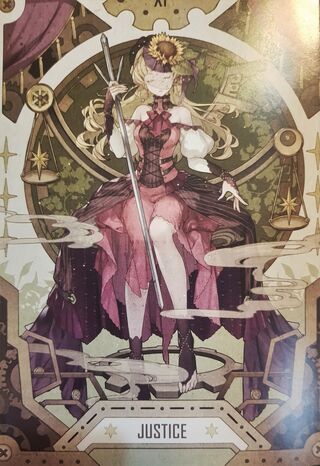 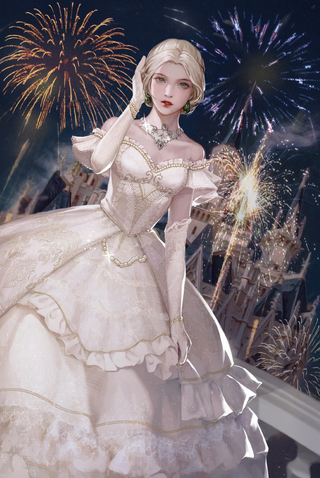 Audrey Hall is a young woman who is a part of the noble and wealthy family Hall. She is a Beyonder of the Visionary Pathway and being one the first member to join the Tarot Club. Later she joined the Psychology Alchemist whose ultimate goal is to study the collective consciousness of all humans.

Audrey is a beautiful young lady with emerald green eyes and smooth blonde hair. She is known as Backlund's Dazzling Gem.

Origin: Lord of the Mysteries

Powers and Abilities: Superhuman Physical Characteristics, Enhanced Senses (As a Beyonder her senses are enhanced; She can smell emotions and thoughts), Analytical Prediction (Spectators possess keen powers of observation. Just like watching operas and dramatic performances, they look at people strictly from a bystander's perspective, discovering people's true thoughts from their expressions, their manners, their oral habits, and their subconscious actions), Extrasensory Perception (Can see the color of emotions, the changes in Body of Heart and Mind; Can sense danger via Danger Intuition; Can see beings such as spirits and ghosts; Can view the world from even more angles and dimensions), limited Abstract Existence (Type 1 as Demigods embodies the Concept of Madness, Strength, Change, Strangeness, Supernaturalness, and their Pathway. As Demigods aren't yet full Mythical Creatures they only represent half of them. She likely also embodies Subcounsciusness and Dreams), Shapeshifting (Can change her appearance with Lie), Non-Physical Interaction (Can interact with spirits, ghosts and other hidden beings), Flight (Via Mythical Form), Weapon Mastery (She's rather skilled with firearms and archery), Social Influencing (Through Psychological Cue), Empathic Manipulation (Via Frenzy; via Bribe - Charm; Can separate emotions), Mind Manipulation (Via Frenzy, Placate, Manipulation, Mind Storm, Mental Plague, Dragon's breath, and Mythical Creature Form), Telepathy (Via Telepathy using mediums like candlelight and extracts), Underwater Breathing (Via Murloc Cufflink), Invisibility (Via Psychological Invisibility), Damage Reduction (Via Scales), Dream Manipulation (Via Guidance, Alteration and Dream Travel; As a Dreamwaver sequence Beyonder she is able to weave a dream indistinguishable from reality making the target not even realize that they are in a dream), Illusion Creation (Can weave out near-real images, if the enemy believes the images are real, then they are real to the enemy; the images will not cause physical damage but will make the target die without realizing), Fire Manipulation (Via Lie - Flame Controlling), Damage Transferal (Via Lie - Damage Transfer), Law Manipulation (Via Hand of Horror - Distort), Fate Manipulation (Via Fate Siphon Charm), Power Modification (Can use Chaos to make others not able to control their powers by modifying their control), Aura (With Hand of Horror she has a presence that causes others to want to lower their bodies and obey them), Avatar Creation (Can split herself in many illusory bodies that will travel through the sea of the collective subconscious to reach the mind islands of multiple peoples at once; Can separate her fake personalities or previous identities and turn them into living people. Even if these identities die it will not harm her true body; Via Virtual Persona), Willpower Manipulation (As a Dreamweaver her combat hypnosis allows her to interfere with the thoughts passed through spirit body threads. It is closer to the interference of will than the hypnosis of the mind), Teleportation (Via Teleportation Charm), Transformation (Via Mythical Form), Mythical Form (In Mythical form she passively will Corrupt all types, Induce Madness and attack the Mind just by seeing her appearance or hearing her), Resistance to: Empathic Manipulation and Mind Manipulation (As a Psychiatrist she can influence her moods and mental states to resist such effects; via Alcohol Nemesis), Law Manipulation (Via Hand of Horror - Distort), Dream Manipulation (Can remain lucid within her or other character dreams and tore out of them to awaken), Madness Manipulation and Corruption (All types as Beyonders gain resistance to such effects as their Sequence increases but also expose them to more things that shouldn't be seen or heard), Soul Manipulation (A Beyonder experienced a qualitative change when becoming a Demigod making their souls more powerful), Poison Manipulation and Disease Manipulation (Poisons and diseases barely work on low and mid level Sequence Beyonders if they aren't imbued with spirituality and as they get closer to Divinity, their resistance increases as well)

Attack Potency: Wall level (As her strength and agility, it had exceeded an ordinary person. Can break through a block of steel with one punch). Higher in Mythical Creature Form (As her size increase massively in this form and all her parameters are boosted)

Speed: Subsonic (Can move faster than a steam train which moves at 161km/h), with Massively Hypersonic+ reaction (Demigods can fight, dodge and react to lighting bolts from the sky and with Beyonders who attack with such means)

Striking Strength: Wall Class (As her strength and agility, it had exceeded an ordinary person. Can break through a block of steel with one punch). Higher in Mythical Creature Form (As her size increase massively in this form and all her parameters are boosted)

Durability: Wall level. Higher in Mythical Creature Form (As her size increase massively in this form and all her parameters are boosted)

Stamina: High (As a Beyonder, her statistics are enhanced)

Range: Standard melee range, hundred of meters with abilities, and at least 500 meters with Dream Travel

Standard Equipment: Lie (It let her shapeshift, and use Flame Controlling, Damage Transfer and Danger Intuition but as long as she wears it will influence her moods and mental state), Hand of Horror (A Sealed Artifact that grants to the user Presence, Distortion, Charming Bribe, and Confusion), Murloc Cufflink (A Sealed Artifact that let the user breath underwater), Alcohol Nemesis (A Sealed Artifact that it give the user resistance to influences on the Body of Heart and Mind), Fate Siphon Charm (Created from a Worm of Time, it will siphon off the target's fate for a short period of time, exchanging the corresponding fate with the user. It will basically switch one fate with that of the target. Audrey has only one charm), Teleportation Charm (Can teleport using it)

Intelligence: Genius. She is proficient in firearms, archery, drawing, and is a psychiatrist. Her intellect and analytical predictions are so good that in just three seconds she can deduce the entire character of multiple characters at the same time.

Awe: She can cause a single target or a group that is within a certain range to feel like they are facing a giant dragon resulting instantly in panic and turn chaotic.

Frenzy: It will trigger the emotional and mental state of the target, causing him to fall into 'frenzy', suffer from an intense level of psychological damage, and sometimes even make the target lose control.

Psychological Cue: Through specific methods, specific words, and a specific medium, they can cue a target, resulting in the person that the ability is used on to follow their arrangement without them realizing it, Or they might strongly abide by a particular promise from the bottom of their hearts.

Placate/Psychoanalysis: They can help a Beyonder that is on the brink of losing control to regain their reason and escape danger. This has a certain probability of failure. The higher your sequence, the easier it is to succeed. The Beyonder can also calm down various psychological instabilities and allow for communication.

Telepathy: Through the mediums of candlelight and extracts, the Beyonder can place their target in a partially hypnotic state and communicate with their Body of Heart and Mind.

Lie: A Sealed Artifact that can change its shape. It grants to the user 4 abilities: Shapeshifting, Flame Controlling, Damage Transfer, Danger Intuition and increase her agility and control over her body. The wearer's emotions will be amplified, and they must learn how to control themselves but for her, it's not a problem thanks to the Sequence chosen.

Hand of Horror: Is a Sealed Artifact crafted by an Artisan using the main material for the sequence 5 Mentor of Confusion of the Black Emperor Sequence. It grants a presence that makes others submit themselves without realizing it, Distort, Bribe - Charm, and Chaos. The downside is that the wearer's thoughts will gradually become more dishonest and corrupt. They will always want to take shortcuts, carry out conspiracies, and do things by disgraceful means. After wearing for more than 3 minutes, the users will be in a state of confusion. Thanks to her Sequence, Audrey can resist partial to its effects after going over the limit of 3 minutes.

Scales: She can create a layer of scales on her skin, largely and reducing any damage.

Phychological Invisibility: With one’s control of the target’s Body of Heart and Mind, allowing oneself to remain in the blind spot of one’s consciousness, she could achieve the effect of invisibility despite someone standing in front of her without being able to sense her.

Murloc Cufflink: Murloc Cufflink is a Sealed Artifact that gives the user limited ability to move and breathe underwater like a fish.

Alchool Nemesis: Alcohol Nemesis is a Sealed Artifact that helps the user to maintain energy and thoughts, improve the user's ability to resist spells that affect the spirit body. It will continuously damage the liver and brain. Wearing it too long, and the user would lose thoughts and logic. The time limit is 30 minutes. User can counteract this by removing the collar before 30 minutes of usage time, and not wear it again for the next 15 minutes.

Guidance: Similar to the Nightmare of the Evernight Pathway, she can guide the target to reveals the deepest secrets within their dream. It needs the target to be asleep to be used so it's used at its highest potential with Hypnosis.

Alteration: She can modify the dreams of others. The alteration dream will affect the target slowly, and let the target to change unconsciously. The principle of Alteration is based on the dream. Using the Spirit Body as a foundation, then gradually affecting the Mental Body, slowly rooted in the subconscious. Compared to direct Hypnosis, this type of manipulation from a dream is subtle, more concealed, and harder to detect. Very suitable to achieve a higher-level goal.

Manipulation: As a Manipulator sequence Beyonder she can allow a Body of Heart and Mind pass through the sea of collective subconscious and enter another person's mind island to directly change their subconscious and read their thoughts, silently driving them to do all sorts of things.

Virtual Persona: It let a Manipulator create many personas, allowing them to a corresponding Body of Heart and Mind letting her resist a lot of influence in the mind domain and also invade other person's mind island.

Mind Storm: A skill that lets the user transform their designed thoughts in an attack that will sweep the surroundings, affecting all enemies.

Consciousness Stroll: It let the user easily travel the sea of the collective subconscious.

Mythical Creature Form: Every demigod, including saints and angels, have their own mythical state. This is a nonhuman form which is a potpourri of complex knowledge, godhood characteristics, and secret symbols. Ordinary people will suffer tremendous damage from a simple glance, to the point of losing their minds. And as the demigod grows in strength, the damage only grows more potent and irresistible. Therefore, creatures at this level have to constantly control themselves to not expose this form, or just from their very existence alone, it can bring about a catastrophe to their surroundings. Her mythical creature form is that of a mind dragon.

Mental Plague: It can plant a strong contagious "source", which infects the surrounding sea of collective subconscious and makes the enemy fall into madness and lose control.