VS Battles Wiki
Register
Don't have an account?
Sign In
Advertisement
in: Tier 9, Tier 9-B, Tier 7,
and 40 more 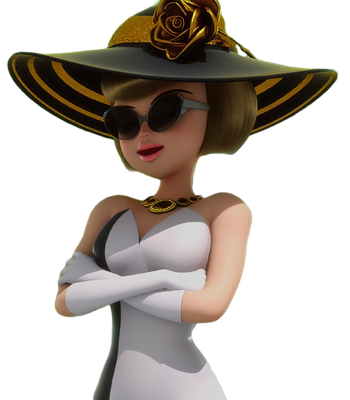 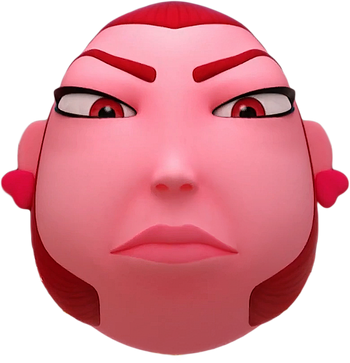 Audrey Bourgeois is the famous director of the fashion magazine, Style Queen. She is also the wife of André Bourgeois and the mother of Chloé Bourgeois. She was living in New York, but she is now currently staying in Paris with her family.

In "Style Queen", after being humiliated by Gabriel Agreste, she is akumatized by Hawk Moth into Style Queen, a glitter-themed supervillain.

In "Heart Hunter", when Audrey and her husband argue each other during their 20th wedding anniversary, they are akumatized into Heart Hunter, a love-devouring supervillain.

Superhuman Physical Characteristics, Skilled Hand-to-Hand Combatant, Skilled Staff Wielder, Immortality (Type 2, 3 and 6), Regeneration (High-Mid. Reformed herself back after being crushed to dust), Energy Manipulation, Glitter Manipulation, Matter Manipulation (Able to convert others into golden statues and glitter dust as well as turn back to normal), Transmutation, Petrification, Deconstruction, Pseudo-Intangibility, Pseudo-Teleportation (Able to transport herself and others by turning into glitter to travel at faster speeds), Flight, Inorganic Physiology (Type 1), Forcefield Creation (Able to create energy forcefields), Can create glitter constructs; Duplication, Paralysis Inducement, Power Bestowal, Possession, Corruption and Mind Manipulation (If her Akuma isn’t purified after being defeated, it would start to multiply into many more Akumas and infect different persons, turning them into Style Queens that would remain immobile until Audrey gets Re-Akumatized)

Superhuman Physical Characteristics, Immortality (Type 6), Large Size (Type 0), Flight, Can turn anyone who get hit by their magic beams into a floating heart, Can absorb their victims after they got hit by their magic beams, Extrasensory Perception (Can detect and sense love from their victims), Vacuum breath, Breath Attack, Duplication, Paralysis Inducement, Power Bestowal, Possession, Corruption and Mind Manipulation (If their Akuma isn’t purified after being defeated, it would start to multiply into many more Akumas and infect different persons, turning them into Heart Hunters that would remain immobile until both André and Audrey get both Re-Akumatized)

Attack Potency: Wall level (Shouldn't be significantly weaker than Adrien. Comparable to her husband, who could tear off a chunk of the roof) | Town level, likely higher (Defeated Ladybug over a year after she fought Stoneheart. Regarded as the most powerful Akumatized villain by the time of her Akumatization), can ignore durability through Transmutation | Large Town level (Claimed to be the most powerful Akumatized villain. Fought Ladybug, Cat Noir and Ryuko about three years after the formers fought Stoneheart), their magic beams ignore durability

Speed: At least Peak Human (Comparable to Alya and Nino) | Supersonic+ with Massively Hypersonic+ Combat and reaction speed (Comparable to The Mime. Able to keep up with Season 2 Ladybug, who could previously react to lightning), Massively Hypersonic+ through pseudo-teleportation (Nearly blitzed Ladybug with her pseudo-teleportation) | Hypersonic with FTL combat and reaction speed (Capable of keeping up with Ladybug, Cat Noir and Ryuko)

Lifting Strength: Average Human | Class G (Superior to the Mime, who held up the Eiffel Tower. Comparable to Ladybug, who crushed a wall and was implied to have stopped a falling plane. Should be superior to Gamer, who could casually lift a large steel pyramid) | Class G

Weaknesses: None notable | Adhesive enough materials are able to stop her glitter from returning to her body, dealing pain on her; that said, she’s able to eventually recreate said parts over time. If her rose it’s destroyed, she will lose her powers (However, she has displayed the ability to turn said flower into dust and make it part of her body, making it inaccessible through regular means). If her Akuma is purified after being defeated, she won’t be able to duplicate. | Won’t attack someone without any sort of love. If their earring are destroyed, they will lose their powers. If their Akuma is purified after being defeated they won’t be able to duplicate

Style Queen has an intangible body made of glitter dust, which she’s able to control at will and reconstruct if damaged in any way. She holds an scepter that allows her to fire energy blasts with concussive force and can turn into glitter statues those who get hit by them.

Style Queen is able to also turn herself others into glitter dust to travel in a puff of golden smoke, simulating a teleport.

Heart Hunter seeks for love and can fire magic beams who turns anyone hit by them into a heart that would get absorbed by the villain. Heart Hunter can also fly and use vacuum breath to suck their victim into their mouth and swallow it whole.