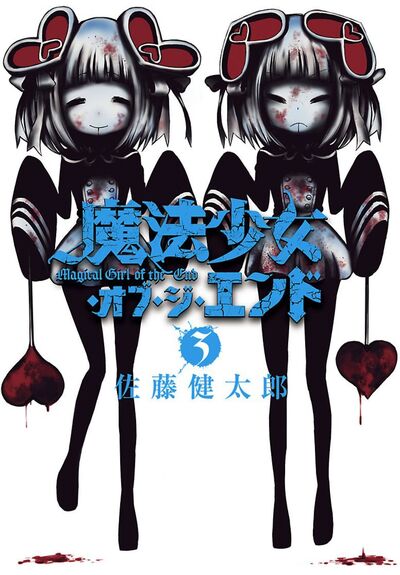 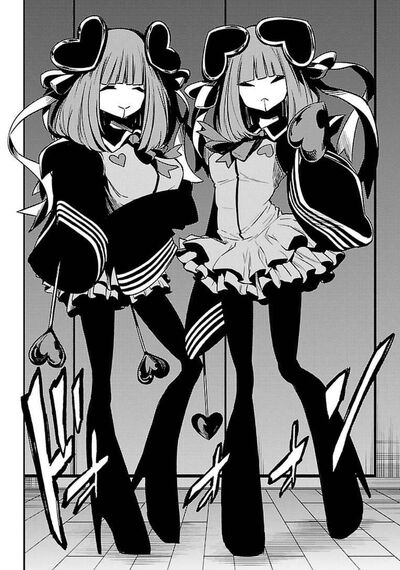 Attraction M/ Lolo (アトラクション・M/ ロロ) and Repel・M/ Coco (レパルション・M/ ココ) are twins Alternative Magical Girls with the power of telekinesis. Lolo, the one with a default smiling face, uses her wand to draw people into a sphere high above the ground, then let them fall to their deaths. Coco, implied to be the elder sister of the two, is the opposite of Lolo, with a default frowning face and uses her power in opposite fashion: forcing people and things away from her at incredible speed.

In the next world, Lolo and Coco were among the Alternative Magical Girls created by the future scientist Tonogaya as bodyguards for people who had memory of the disaster of the previous world, and became Kaedae Sayano's bodyguards.

Attack Potency: Large Building level (Each of them is stated by Word of God to wield a force equivalent to 6 tons. Coco could send Flame Dog M flying a significant distance, destroying a chunk of an apartment building in the process)

Durability: Street level (Akuta Rintaro managed to take down Lolo by stabbing her in the head) pre-transformation, possibly Higher after their transformation. Regeneration makes them hard to kill.

Standard Equipment: Their wands. The end of Lolo's wand is heart-shaped, while Coco's is the opposite.

Retrieved from "https://vsbattles.fandom.com/wiki/Attraction_M/_Lolo_and_Repel_M/_Coco?oldid=4865114"
Community content is available under CC-BY-SA unless otherwise noted.