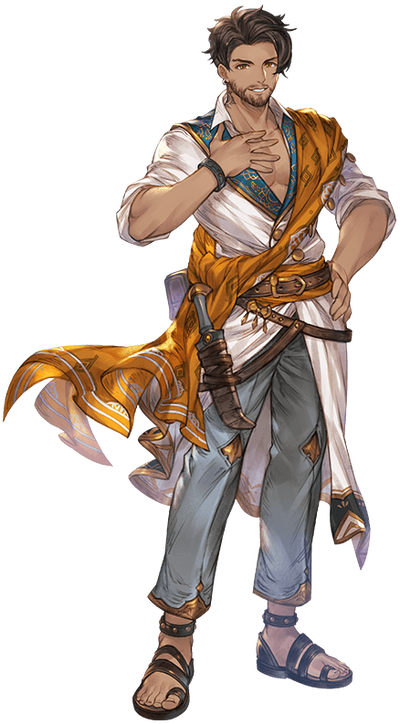 Attiyah is a cheery, muscle-bound merchant. Ever since losing his parents, he's been aimlessly roaming the land while plying his trade. His brawny build is a trait inherited from his father; he can smash rocks with his bare fists and can run with the speed of a cheetah. Despite these facts, he prefers to resolve conflict peacefully and only fights when he must—namely to protect those he cares for. Some consider his biggest character flaw to be his do-gooder personality; too often he puts his own circumstances aside to help others in need, causing him to be late for more than a few business meetings. He descends upon Tahar Island, braving the sandstorms in hopes of one day reuniting with a young woman he fell in love with at first sight. Not knowing her name, his only clue is a love poem left behind by the woman.

Powers and Abilities: Superhuman Physical Characteristics, Martial Arts, Acrobatics (Jumped out of a building and parkour), Stealth Mastery (Sneaked into a mansion without getting caught), Rage Power (Become stronger upon rage when fighting against martial artists of Tahar), Fire Manipulation, Statistics Amplification (Can increase strength and speed), Empathic Manipulation (Can charm opponents with his dance), Social Influencing (Forced Tabina's grandfather to forget his hatred, which is when converted to power, is enough to destroy Sahar island), Aura and Damage Boost

Attack Potency: Multi-Continent level (With Tabina, he fought against Tisiphone, a Primal Beast who is so strong that Aliza needed to train for days in order to defeat it)

Speed: Massively Hypersonic+ (Comparable to Primals who are as fast as lightning)

Stamina: High. Was able to fight back to back and run across town for hours.

Intelligence: Above Average. Very skilled martial artist, as he completely stomped various martial artists at Sahar and fought against Tisiphone, a Primal Beast.

Weaknesses: Possibly weak to Water based attacks. He is a pacifist and do not intend to fight unless it's absolutely needed.

Retrieved from "https://vsbattles.fandom.com/wiki/Attiyah?oldid=5249093"
Community content is available under CC-BY-SA unless otherwise noted.