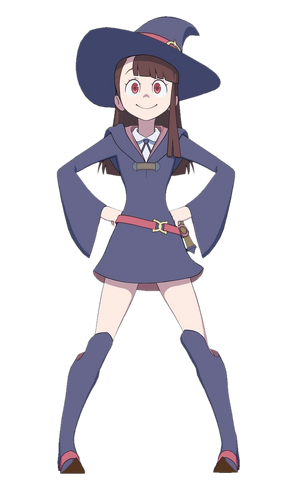 Despite being born to a fully human non-magic family, Atsuko Kagari harbored a dream of becoming like her idol "Shiny" Chariot du Nord after visiting one of her magic shows. To accomplish this dream, she enrolled in Luna Nova Academy after hearing it was accepting non-magical students due to it being the school where Shiny Chariot graduated. Though she struggles with magic due to her non-magical lineage, her determination allows her to overcome whatever problem faces her down.

Attack Potency: Small City level (Should scale to her durability)

Lifting Strength: Superhuman (held a guillotine blade back, sent Andrew several meters back with a simple push, pulled out Vajarois' tree-sized roots with the help of Sucy and Lotte)

Durability: Small City level (Survived crashing into the ocean at over mach 1000)

Intelligence: Despite her personality, Akko is surprisingly clever. She lured the cockatrice into getting tangled in mandrake vines, escaped Luna Nova by hiding in a food truck and brought Captain Holbrook to the academy by grabbing onto the Bell Tower's bell and using a spell to combine with its clapper, while the clapper was on campus as Professor Holbrook's staff.

Weaknesses: Impulsive, reckless, short-tempered, mostly has poor control over her standard magic (She gets better in the final episode of the anime)