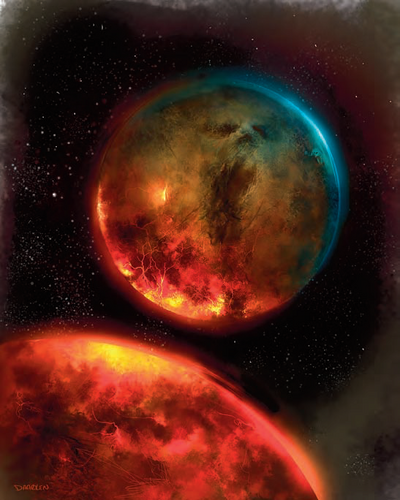 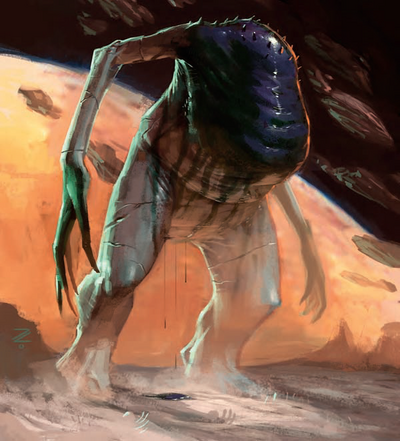 A primordial force, Atropus once was an entity in the primeval void that existence sprung from. In order for the multiverse to take shape there must be an act of death so that other life is created. With this being's death sprung the Gods who shaped reality. However this did not fully kill Atropus, who instead became the afterbirth of creation. The antithesis of the gods, Atropus draws its power from the infinite void of the Negative Energy plane. Atropus' goal is to undo its first and greatest mistake. It moves around the universe, destroying everything in its path until it eventually destroys all mortal life therefore erasing the gods, and so itself, from the multiverse.

Age: Existed before time was established

Attack Potency: Likely Multi-Continent level (Atropus sheds the Atropal abomination as it moves, so its aspect should be comparable if not stronger than other Abominations) | Moon level (Generated this much kinetic energy)

Speed: At least Hypersonic+, with High Hypersonic+ reactions (Far above people who can avoid the spell Call Lightning and can tag individuals with the evasion feat). | High Hypersonic (Can move at 40,000 feet per second or Mach 35)

Stamina: Limitless (As an undead primordial being Atropus and its avatar have virtually limitless stamina)

Intelligence: At least Genius (Has an Intelligence rating of 25 when 18 is considered genius)

Weaknesses: If its avatar is slain Atropus will leave the planet its attacking. Large amounts of Positive Energy can weaken its avatar

Note: As an Elder Evil Atropus possess a special ability called Malefic properties which allows it to weaken Divine beings, affect them with its powers, and nullify their powers. The strongest people it can affect is on the 2-A scale.