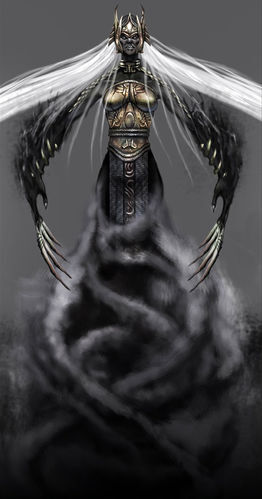 Atropos is one of the Three Sisters of Fate, who control and decide the destinies of every living being, mortals and gods alike. She and her sisters are so powerful that gods and titans fear and respect their power. Even Cronos himself tried to bribe the Sisters by giving Steeds of Time to them.

Attack Potency: At least High Universe level, likely Universe level+ to Low Multiverse level (One of the Sisters of Fate - who are collectively stated by Cory Barlog to be "more powerful than the Gods, than the Titans, than anyone in the mythological world". Fought against GOW 2 Kratos. Should be comparable to her sister Lahkesis)

Speed: Infinite (Is able to keep up with Kratos, who can react to Helios' light, who's able to illuminate the entire underworld with his light, which is stated in numerous sources to be infinite in size)

Range: Standard melee range, likely higher with energy attacks and manipulation; at least hundreds of meters if she is capable of assuming Giant Size

Intelligence: The Sisters of Fate can see the future and predict what would happen to any living being. She is the Sister of Fate who ended mortal's lives by cutting their thread of life.