VS Battles Wiki
Register
Don't have an account?
Sign In
in: Characters, Immortals, Regeneration Users,
and 32 more 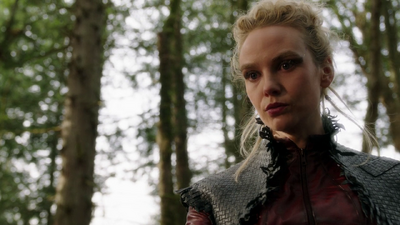 Atropos was the sister of Clotho and Lachesis, the three of them being the Ancient Greek Fates. Atropos was the terminator of destiny who cut the threads of the Loom of Fate to end people's lives. This also gave her the power to reanimate the dead, with which she caused the England Zombie Apocalypse. She was ultimately killed by the Legends using her to destroy the Loom of Fate.

Age: At the very least thousands of years old, likely as old as the Multiverse

Powers and Abilities: Superhuman Physical Characteristics, Immortality (Type 1, 3 and 8, possibly Type 5, was barely phazed by being stabbed in the stomach with the Hellsword, wich can erase beings from existence and kill immortals. Gods are stated to be unable to be killed unless they lose their immortality), Regeneration (Low-Mid, immediately regenerated from being stabbed in her stomach with the Hellsword by Sara. Regenerated her hand after Clotho chopped it off with the Hellsord), Death Manipulation (Can kill a person by pulling a thread out of said person's body that represents their life and cut it. As a Fate, Atropos's role is to cut the threads of the Loom of Fate, ending a persons's life at a predetermined date. Can also kill mortals when they look at her true form), Bone Manipulation and Weapon Creation  (Can create weapons like daggers from her bones), Necromancy, Limited Telepathy and Pain Manipulation (Can directly communicate with her sister, Clotho, via pain-inflicting whispers), Shapeshifting (Took the appearence of Constantine and can take a human form in general), Sound Manipulation (Can imitate the voice of the people she took the appearence), Limited Light Manipulation (Her true form is made of pure divine light), Power Bestowal (Unwillingly granted the ability to see the future to Sara after she looked upon her true form and survived and can probably do it by her own will), likely Dimensional Travel (Can travel between dimensions like Hell and the Multiverse as she wants), Master Hand-to-Hand Combattant (Vastly superior to the likes of Sarah), Weapon Mastery (Superior to the likes of Sara), Resistance to Magic (Shrugged off multiple spells from Constantine), Fate Manipulation, Reality Warping, Time Manipulation, Resurrection, Immersion and likely others with the Loom of Fate (Collectively with her sisters)

Attack Potency: At least Wall level, likely Small City level (Vastly above the likes of fighters like Sara Lance, who is herself a formidable fighter, and easily defeated her in their fights. Superior to Clotho, who knocked out Neron with a punch), Unknown with the Loom of Fate

Speed: At least Supersonic (Faster than the likes of Sara and easily overpowered her and dodged her attacks)

Lifting Strength: At least Class 1 (Superior to the likes of Sara)

Striking Strength: At least Wall Class, likely Small City Class (Superior to the likes of Sara, whom she easily defeated twice. Superior to her sister Clotho who knocked out Neron with a single punch)

Stamina: Unknown, possibly Infinite due to being a goddess

Standard Equipment: Her Ring, Bone Knives, The Loom of Fate (Collectively with her sisters when complete)

Intelligence: Gifted (Possesses an extremely extended knowledge of supernatural artifacts and forces as well as the Multiverse due to being a goddess. Is also a master combatant superior to the likes of Sara Lance)

Weaknesses: Atropos's powers are directly linked to the Loom of Fate. When it is intact, she is at her full capacity but when it is broken into separate pieces and they are scattered throughout different dimensions and/or universes, her powers are diminished. When its pieces are broken but are in the same plane/dimension/universe, her powers are at near full capacity. If the Loom is destroyed, she will lose her immortality.