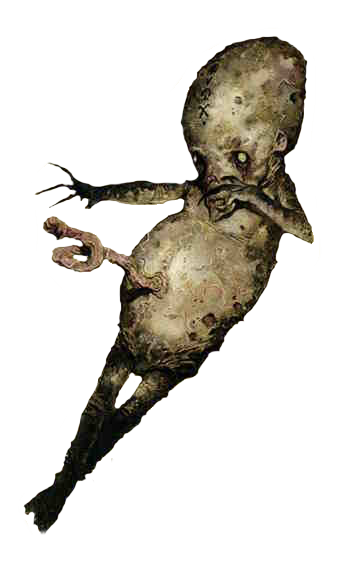 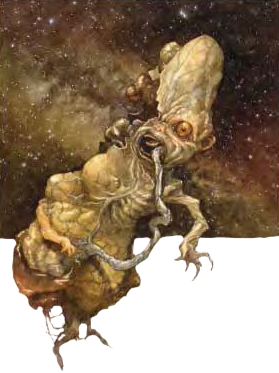 Atropals are stillborn godlings who have spontaneously risen as undead. A foul aura surrounds the Abomination, snuffing out weaker life and draining the souls of those near it. When one rises the Gods cringe and seal them in tombs for all time. But sometimes the barriers are broken and one is freed to wreak havoc on the multiverse.

Unlike most other Abominations however, an Atropal is closer to divinity than most realize making its far harder to kill. If its proper form is slain but its body not completely destroyed, its remaining flesh can reform into a Atropal Scion to furthur its goals of widespread death and destruction.

Lifting Strength: At least Peak Human (Can push at least 340 kilograms) | At least Class K (Can grapple and overpower creatures such as the Tarrasque)

Striking Strength: Unknown (Both incarnations are noted as having atrophied arms and primarily rely on spells and magical touch attacks to do damage rather than physical strength)

Stamina: Virtually limitless (Even without a Divine Spark Abominations require almost no substance and can live for eons between needing them. With a Divine Spark they require nothing to live and cannot die to a natural cause. An Atropal is an undead which is noted as possessing infinite stamina)

Range: Extended melee range due to size, much further with magic, multi-universal with certain abilities such as Teleportation and Enhanced Senses

Intelligence: Above Average (Has an intelligence rating of 16 when the average Human is rated at a 10) | Extraordinary Genius (Its intelligence is equal to that of an Elder Brain)

Weaknesses: Good-aligned or sentient/living weapons can bypass its regeneration

Note: This profile assumes that the Atropal possess a divine spark

Retrieved from "https://vsbattles.fandom.com/wiki/Atropal?oldid=5845096"
Community content is available under CC-BY-SA unless otherwise noted.