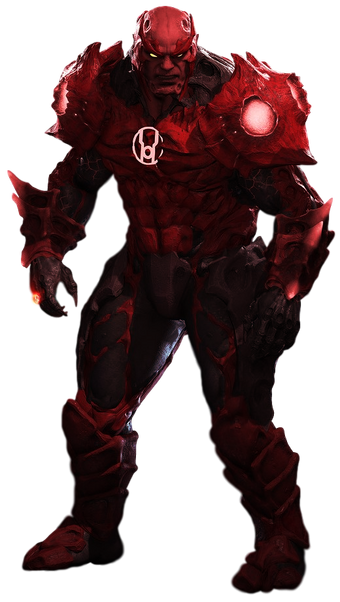 During Green Lantern's visit to Atlantis, Atrocitus attempts to stoke Hal's rage, evidenced by red energy surrounding Hal's eyes after certain events make Hal angry. This occurs several times throughout the story. After Green Lantern defeats Bane, Atrocitus and Dex-Starr make their presence known, with Aquaman expressing his surprise of the existence of Red Lanterns and Hal explains their nature and volunteers to fight the Red Lantern "ring to ring."

As the two circle each other, Atrocitus confirms his interference in Hal's mind and tells him of his time as Yellow Lantern causing his victims to demand vengeance, and how all his crimes are not absolved even as a Green Lantern. Atrocitus states Dex-Starr's intention of ripping Hal's heart out, but states his observation of a spark of rage within Hal, and vomits on him. As Green Lantern begins to suffer from the surge of anger, Atrocitus presents the writhing Hal with a Red Lantern Ring and asks him if he can forgive himself. As the ring moves closer, Atrocitus urges Hal to submit to his rage and become a Red Lantern but is blasted back as Green Lantern regains control.

The two Lanterns fight, and Atrocitus is defeated. He leaves, but tells Hal of his world burning and swears that Hal will beg for vengeance in the future. Atrocitus is not seen after this point in the story, but he continues to influence Hal indirectly.

Attack Potency: Small Country level (On par with Hal Jordan and fought him on multiple occasions before their encounter in Atlantis. Can fight the likes of Superman)

Speed: Massively FTL+ (Can keep up with Hal Jordan and beings like Superman)

Weaknesses: The ring holds a limited charge and needs to be recharged with a power battery every so often. If he loses focus or concentration, his power will weaken. Very arrogant.