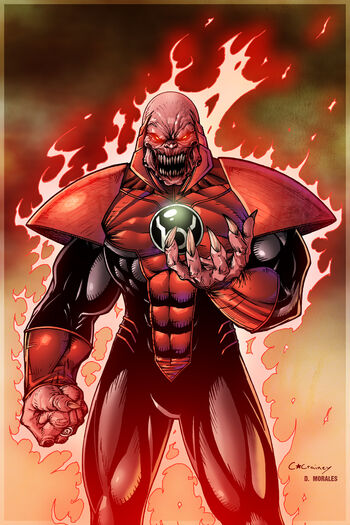 Atrocitus is a Red Lantern and an enemy of the Guardians of the Universe, and the Sinestro Corps. He was originally the leader of The Five Inversions, having joined the group after escaping the genocide committed by the Manhunters and watching them kill his family, and thereupon established the Empire of Tears that spanned a great swathe of space, until their eventual imprisonment and defeat. Atrocitus, however, convinced Abin Sur to free him by using his knowledge of the prophecy of the Blackest Night--later manipulating Abin Sur into experiencing fear, and ultimately mortally wounding Abin Sur, directly causing the events that would lead to Hal Jordan becoming the new Green Lantern of his Sector. Later, on Ysmault, he performed a blood ritual, slaying three of the four Inversions and using their blood to create the first Red Power Battery and ring. He then christened the battery in the last Inversion's blood, thus establishing the Red Lantern Corps.

Age: Unknown (At least over 3.5 billion years old, as Atrocitus and his family lived during the millennia-long war between the Guardians of the Universe and their rebellious Manhunters)

Lifting Strength: Likely Stellar (Should be comparable to Green Lanterns such as John Stewart, who can move around the mass of an entire solar system. Green Lantern constructs have also been shown as capable of restraining creatures on par with Kryptonians in raw strength)

Intelligence: Likely Extraordinary Genius (He was a psychologist before the destruction of his sector and forged the first Red Lantern power battery by himself. He also created an energy-draining device from a gun and computer parts.)

Weaknesses: Rings hold a limited charge, and need to be recharged with a power battery every so often, Cannot be used if the user is under the influence of drugs or if there is an involvement of neural interference. If he loses focus or concentration his power will weaken, and Atrocitus is also very arrogant.