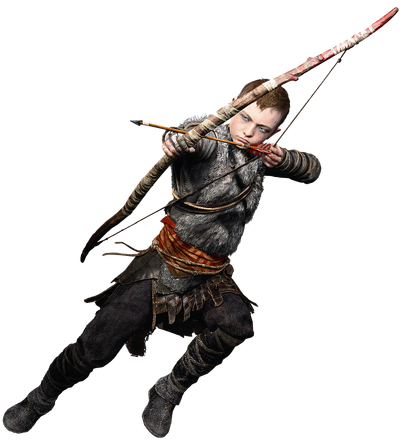 Atreus was born to Kratos and Faye in the frozen realm of Midgard that was ruled by the Norse Gods. After his mother's death, Atreus journeys with his father to spread her ashes on the highest peak in all the realms, encountering countless dangers on his quest to honor his mother's last wishes and learn about both his father and his heritage.

Powers and Abilities: Superhuman Physical Characteristics, Skilled Archer and Knife Wielder, Runic Magic, Summoning, Electricity Manipulation (Via Shock Arrows), Light Manipulation (Via Light Arrows), Resurrection (Can revive others with Resurrection Stones), Limited Rage Power and Berserk Mode, Limited Precognition through his dreams, Enhanced Senses (Can sense the power of other beings), Telepathy (Can sense the thoughts and emotions of other beings)

Attack Potency: Small Building level (Capable of damaging Trolls, Ogres, and Ancients, who are around this level, Damaged Hrezlyr who is of this level through sheer size, Killed a Draugr on his own) | Unknown (Capable of injuring Baldur with his strikes, his arrows can harm both Kratos and Baldur, but the fact that he constantly proceeds to get utterly overpowered with no effort makes his reasonable assumed power harder to gauge)

Speed: Unknown | At least Massively FTL+ (Should be somewhat comparable to Kratos. His arrows can hit creatures that are faster than Kratos)

Intelligence: Gifted (Has the innate talent to understand written and spoken languages he has never heard of or read before by tracing their connections, being able to quickly learn how to read the Niflheim and Muspelheim languages when given a cipher, how to read Greek when given a jug of wine from Sparta, and even how to speak the dead language of the World Serpent despite only hearing it a handful of times. He can also understand some animals, and even Mimir, the smartest man in the nine realms, took note of Arteus' linguistic capabilities for someone of his age)

Weaknesses: Cannot willingly use Spartan Rage and doing so will cause him to overtax his body immediately, Cannot use Resurrection Stones on himself.