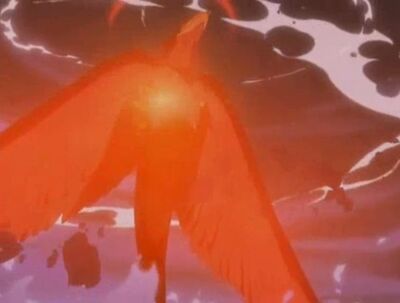 Atomsk (アトムスク?, Atomusuku) is the most powerful space pirate in the galaxy, also known as the "Pirate King" (海賊王, Kaizoku-Ō). An enigmatic character, all that is known for certain about him is that he can steal entire star systems with his immense N.O. power, which Haruko desires. He takes on the form of a massive phoenix-like creature. Commander Amarao erroneously believes him to be Haruko's lover, and imagines him in a more humanoid form.

Superhuman Physical Characteristics, Spatial Manipulation (All MM Robots are able to distort space), Spaceflight, Portal Creation (The N.O. channel opens a hyperspace channel that allows him to steal even stellar systems), Gravity Manipulation (The N.O. creates an anti-gravity power, in addition to being able to freely manipulate gravity by moving his wings), Energy Manipulation (Can shoot thin threadlike lasers), Flight, Absorption (Can absorb matter), Self-Sustenance (Type 1), Fusionism (Can fuse objects together), Power Bestowal via Possession (Can possess other beings to grant them his power), Large Size (Type 0), Resistance to Heat Manipulation, Electricity Manipulation, Acid Manipulation (The alloy MM robots are made up allows them to alter the molecular pattern of their body to adjust their bodies to heat, electricity, acid, and more), Extreme Cold and Cosmic Radiation[1]

Lifting Strength: At least Class K (Lifted up an giant oversized iron in his Phoenix form[7])

Durability: At least Multi-City Block level+, likely higher (Has fought Haruko many times in the past[8])

Intelligence: Atomsk is a legendary intergalactic criminal that has managed to escape the grip of the Galactic Space Police Brotherhood on numerous occasions 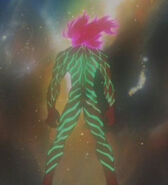 Amarao's visualization of Atomsk
Add a photo to this gallery