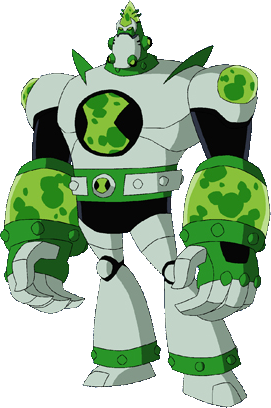 Atomix is the Omnitrix's DNA sample of an unknown species from an unknown planet. According to WoG, he is Ben's second most powerful transformation.

Attack Potency: Large Planet level (Held his own against Malgax before eventually being defeated. Confirmed by WoG to be Ben's second most powerful transformation, which would make him more powerful than Way Big)

Speed: FTL combat speed and reactions (Should be faster than Way Big. Kept up with Malgax for a while.)

Lifting Strength: Class Z (Should be physically stronger than Way Big and managed to push Malgax.)

Weaknesses: Atomix is extremely overconfident and can cause a total meltdown like an actual nuclear reactor. He can get tired after using up a lot of his energy.