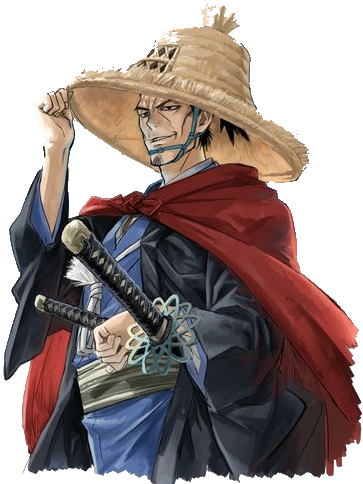 Atomic Samurai has long black hair tied in a topknot with dark eyes and a prominent jawline. He has a small goatee and is usually seen chewing on a blade of grass. His attire consists of a hooded red cloak with an atom symbol on the back that's draped over his open black haori. Beneath the haori is a traditional, loose-fitting white robe tied with a white sash and two haori ties. He also sports a pair of swords in his waist tied on his left hip.

Atomic Samurai has a rather prideful personality, seen when he refused to shake Saitama's hand, telling him that he only acknowledges the strong and would greet the latter if he makes it to the higher ranks of S-Class. This indicated that he could be biased when evaluating people based on appearance and status, rather than by inner power. He also appears to dislike being called old.

Despite his disdainful nature, he behaves humbly to those he respects. This is seen with Bang, a fellow hero whom he holds the utmost respect for, and also towards his fellow Master Swordsmen.

Attack Potency: At least City level (Considered to be a powerful S-Class and cut Melzalgald to pieces several times. Darkshine stated he was one of the few heroes that would’ve defeated Half Monster Garou before he even showed off his technique. This was before Garou breaking his limiter against Darkshine)

Range: Extended melee range with his katanas, up to tens of meters with Air Blade and Focused Atomic Slash

Intelligence: Samurai is one of the top S-Class heroes. He is regarded as one of the most powerful of them, as well as their most powerful backup hero. He is also considered Earth's Strongest Swordsman. A master swordsman, he specializes in close range combat, cutting his opponents to pieces in a blink of an eye. His abilities are so high that Superalloy Darkshine claimed that Samurai would be able to deal with Garou before the latter could use any of his techniques. Atomic Samurai is also pragmatic enough to attack foes from behind when they're distracted. He is also a talented teacher, having taught three disciples who would have become S-Class heroes if not for the presence of Sweet Mask.

Weaknesses: As demonstrated during the fight against Melzalgald, his expertise in sword fighting has made him unwilling to try new methods to defeat his enemies, relying solely on slicing. He is very arrogant and often judges someone just by appearance.

Master Swordsman: Atomic Samurai has shown to be a formidable swordsman. Legend says he can cut down over 100 enemies with each strike. His sword attacks are so fast and strong that the enemies are slashed into many pieces in an instant without even being able to react. He was able to cut a monster to bits using a mere toothpick. His slashes were even capable of dispersing Orochi's beams.

Master Teacher: Atomic Samurai is shown to be very skilled at instructing and raising disciples in the art of the sword. This is demonstrated by his three disciples, who are all at the top of the A-Class rank of the Hero Association, right underneath Sweet Mask himself. According to Fubuki, all of Atomic Samurai's disciples would have already been in S-Class, if it weren't for Sweet Mask's gate-keeping.

Game render
Add a photo to this gallery