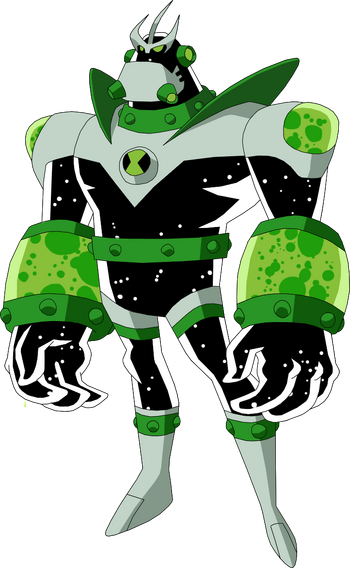 Atomic-X is the combination of Alien X's and Atomix's DNA. He can only be accessed by using the Biomnitrix.

Classification: Alien Hybrid of Celestialsapien and an unknown species' DNA

Attack Potency: At least Large Planet level (Effortlessly flicked Vilgax and sent him flying. Should be comparable if not superior to Atomix)

Speed: At least FTL (Should be comparable if not superior to Atomix)

Weaknesses: There are likely upper limits on Atomic-X's ability to manipulate space-time since he was unable to stop the ripple effect of a Chronosapien Time Bomb even though Chronosapiens like Clockwork can do so.