VS Battles Wiki
Register
Don't have an account?
Sign In
Advertisement
in: Characters, Female Characters, Heroes,
and 16 more 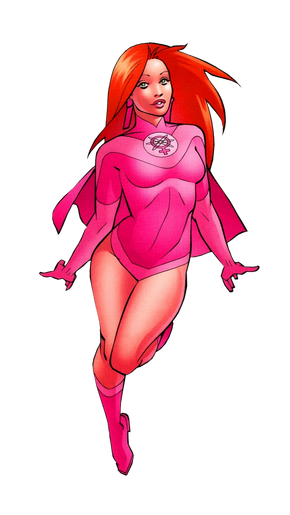 Powers and Abilities: Flight, Transmutation, Weapon Creation (Can create blades with her powers), Regeneration (At least Mid-Low, Likely Low-Mid; Her regeneration should be comparable to her healing as she completely healed Invincible after he was bisected), Limited Healing, Limited Empowerment (Her regeneration gave Invincible and herself a slight boost in power), Barrier Creation, Molecular Manipulation, Durability Negation with her powers, Telepathy, Mind Control, Telekinesis, Immortality (Type 3; Her powers prevent her from dying of old age)

Speed: Superhuman flight speed (she can fly herself and others by projecting solid light constructs beneath her and her passengers at speeds up to 130 mph) with Supersonic+ reactions (can catch several bullets from Killcannon in her solid energy constructs) | Varies from Massively Hypersonic to Relativistic+ (Became far stronger and caught Conquest off-guard. Noted as being one of few non-Viltrumites comparable to a Viltrumite) | Varies from Massively Hypersonic to Relativistic+ (Likely as fast, if not faster, than previously. Defeated legions of Viltrumites as they were all flying towards her)

Intelligence: High, has had an instinctive understanding of chemistry and the molecular structure of things since she was an infant.

Weaknesses: A downside to Atom Eve's transmutation powers is that she absorbs any unused atoms into her body, which must later be eliminated from her system as waste. She claims that on days when she uses her powers a lot she can "go to the bathroom" six or seven times, due to mental blocks placed in her mind along with her powers, Eve normally cannot use her matter alteration powers on living matter.

Eve started notably weaker as a hero than Mark, as she admits that her arch-enemy, Killcannon, could be easily defeated by him, and she also admitted to not being able to fly anywhere near as fast as him at the time. However, after fighting Conquest, more of her abilities were unlocked, and she became stronger. She had demonstrated abilities comparable to a Viltrumite, and the Invincible guidebook, which was published after this fight but prior to her second awakening, suggests she has a comparable power level to a Viltrumite. After her second awakening, she could fight many Viltrumites at once without issue. However, her fighting capability is due to her abilities and mostly does not scale to her natural durability.