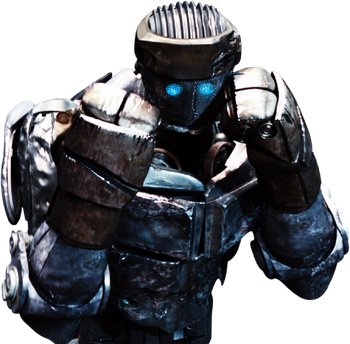 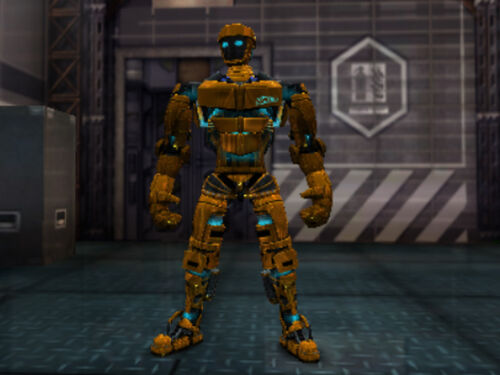 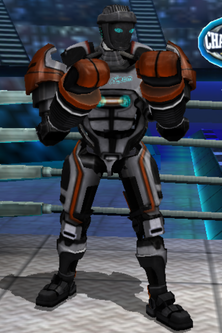 Atom is a robot from Real Steel, a universe in which human boxing has been replaced by robot boxing. In the movie, Atom was originally a Generation Two sparring bot. Many years later, when Charles Kenton and his son, Max Kenton, go looking in a junkyard for parts to create a robot. Max nearly falls off a cliff and gets snagged on Atom's arm, which is sticking out of the dirt. After Charlie pulls Max back up, the latter unearths Atom, saying that Atom saved him from falling to his death. Charlie, Max, and Atom go on to fight in the World Robot Boxing tournament, and eventually fight the champion, Zeus, to a standstill. The judges declare Zeus the winner, due to Atom having been knocked down multiple times and Zeus having been knocked down once at the end of the fight, but Zeus' reputation is tarnished and Atom becomes the People's Champion. Atom likely would have beat Zeus if he had been using his Shadow Boxing feature for the whole fight, which Charlie had saved for the final round.

Gender: None, but referred to as male

Powers and Abilities: Superhuman Physical Characteristics, Shadowboxing (Copies and stores the movements of his owner, Charlie Kenton, a former professional boxer, or his opponent), Martial Arts, Self-Sustenance (All Types, is a robot with no human needs), Voice Recognition (Reacts to what Charlie or Max tells him to do), Immortality (Type 2, superior to Ambush, who kept operating after having all of its limbs torn off by a bull), and Inorganic Physiology (Type 2), Large Size (Type 0; Atom is seemingly twice the size of a normal human. Dwarfs his operator, Charlie Kenton who was a former professional boxer)

Attack Potency: Wall level (Comparable to Zeus, who tore Axelrod in half and effortlessly flattened Gridlock's head , with both robots likely being made of steel)

Speed: Unknown movement speed, Normal Human combat speed with Voice Control, Peak Human with Shadow Boxing (Copies the movements of Charles Kenton, who, in the days of human boxing, was among the greatest boxers in the world)

Durability: Wall level (Survived five rounds against Zeus, who easily crushed Gridlock's head , which is presumably made of steel, possibly the most durable robot in the series due to the fact he is a sparring bot and also that in the mobile games, Real Steel WRB and Real Steel: Champions, he cannot have his limbs or head ripped off)

Stamina: High (Fought with Zeus and burned out Zeus' energy)

Intelligence: Mindless (Due to being a robot with no thoughts of his own; although in combat he is controlled by a former professional boxer, and he is strangely implied throughout the movie to possess some sort of sentient nature)

Weaknesses: Completely reliant on his operator, Charlie Kenton. However, should Charlie be killed or incapacitated, Max can take over. Atom's moves are pre-programmed and can easily be anticipated and intercepted, although if his shadowboxing feature is used, his moves can become more unique and unpredictable. Also, Atom can be knocked down for short periods, as shown during his fight with Zeus, and his special moves can be blocked or dodged by his opponent if not timed correctly.

Freddy Fazbear (Five Nights at Freddy's) Freddy's Profile (Charlie had prior knowledge of the Crying Child, this was Canon Freddy)