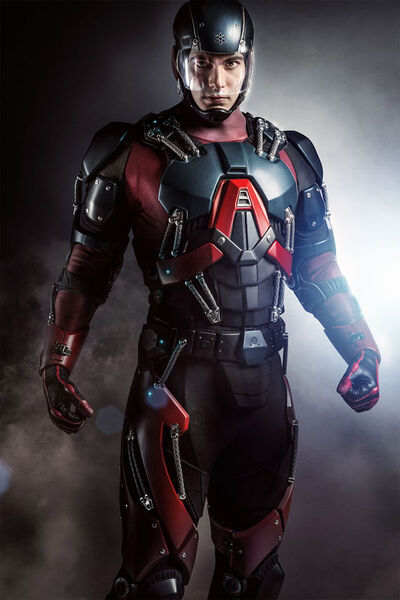 Dr. Raymond Carson "Ray" Palmer, born 1981, knighted Sir Raymond of the Palms by Queen Guinevere of Camelot, is a businessman and the former CEO of Palmer Technologies, previously known as Queen Consolidated. He is the brother of Sydney Palmer, who in at least one version of the future, is considered to be the father of the robotics industry. Ray was engaged to the late Anna Loring, and later dated Felicity Smoak, a clandestine member of Team Arrow, although their relationship did not last. Having designed a powerful exosuit, he began acting as a vigilante in Star City, calling himself The Atom. While testing out a new function of his exosuit, Ray accidentally caused an explosion which shrunk him to a miniature size; stuck in this state and unable to call for help, his friends presumed him dead. After months Ray managed to contact Felicity but was captured by Damien Darhk for his technology. However, thanks to the efforts of Team Arrow, Ray was rescued and would continue to aid them in their fight against H.I.V.E.

In early 2016, Ray Palmer was recruited by time-traveler Rip Hunter on a mission to take down Vandal Savage. After Ray's A.T.O.M. suit was destroyed during a mission in ancient Japan, Mick Rory gave him the Cold Gun, he nicknamed himself Colonel Cold, using both Leonard Snart's weaponry and Cold glasses. After getting a new source of dwarf alloy, Ray went back to his Atom identity.

Durability: Small Building level+ | Small City level (Took 1/3th of a lightning bolt from season 3 Flash but was only knocked back and reacted about the same as Firestorm) | At least Small City level with Giant Form (Survived blows from The Giant Atom Robot)

Intelligence: Genius-level intellect/Great business acumen: Ray is very intelligent, having an IQ of 140 and three PhDs. Ray is also a skilled businessman, being able to lead a billion dollar enterprise with success. He recognizes skilled people and is excellent at recruiting them for his cause.

Weaknesses: His Exosuit needs to recharge. If the Exosuit is heavily damaged it could explode. Without the Exosuit, his abilities are that of a peak human.

-A.T.O.M. Exosuit: Ray wears an exosuit as his heroic alter-ego, The Atom, to hide his identity from his enemies, when he goes out fighting crime. It was designed by Ray himself, the armor is made out of dwarf star alloy, making it strong enough to withstand damage from bullets, arrows, and explosions. Its offensive capabilities include electricity projection, compressed hard light blasts, and photon blasts. A new discovery in the suits technological applications, allow it to miniaturize selected targets, especially its wearer.