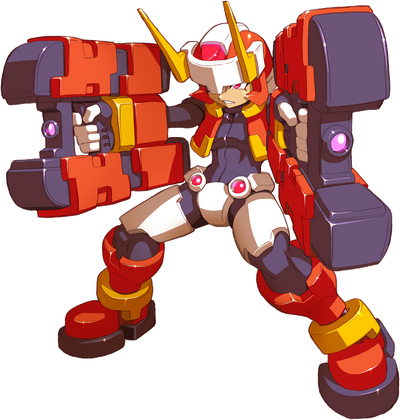 Atlas is the biomatch for Model F and is thus the Mega Man of Fire who wields the powers of Fighting Fefnir. A war veteran who values power above all else, she plans on winning the Game of Destiny to plunge the world into a never-ending war in order to spur on humanity's evolution.

Attack Potency: Solar System level via power-scaling (Model F was designed to emulate the powers of Fighting Fefnir, but lacks the feats to prove it)

Speed: Massively FTL+ combat speed and travel speed via power-scaling (Designed to match Fefnir, but lacks the feats to prove it)

Striking Strength: Solar System Class (Can damage other Biometals, presumably on par with the original Fefnir)

Durability: Solar System level (Survived her fight with Grey/Ashe as well as the collapse of Ouroboros)

Stamina: Very high, can fight other Mega Men to a standstill and survived her fight with Grey/Ashe as well as the collapse of Ouroboros none the worse for wear.

Intelligence: Atlas is a hardened and capable military individual who spent most of her life fighting Mavericks. She displays almost complete mastery of her Biometal's capabilities and is able to even threaten veterans like Vent and Aile. However, she's hot-headed and fully attached to the philosophy of Social Darwinism, leading her to look down upon those she perceives as weak.