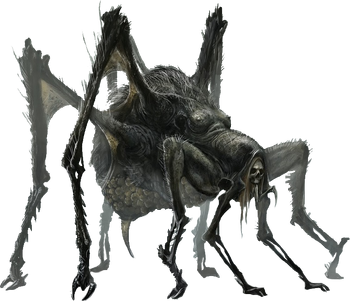 "The Spider God", Atlach-Nacha resembles a giant spider with a human-like face. It dwells in a cave system beneath Mount Voormithadreth, in the now extinct Arctic kingdom of Hyperborea. There, it spins a great web, forming a great bridge between the Dreamlands and the waking world. It is believed that when the web is complete, the end of the world will come.

Speed: Unknown (Exists and is in the process of building a bridge between the real world and the Dreamlands, two different planes of existence)

Intelligence: Nigh-Omniscient (Like the other Great Old Ones, it knows all that is transpiring in the universe, and likely beyond)

Note: It has been decided that the High 4-C Rating for Great Old ones is invalid due to being a semantic misinterpretation. More can be explained here.

Start a Discussion Discussions about Atlach-Nacha